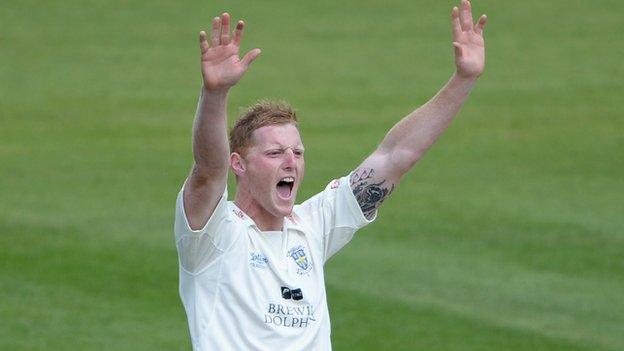 Durham needed only 16 balls on the final day to polish off the Derbyshire tail to win by 279 runs.

The visitors resumed on 181-7, still needing another 291 to win, but they slipped to 192 all out to fall to their sixth Championship defeat this season.

Chris Rushworth (4-39) got rid of Tim Groenewald to give him 10 wickets in the match, while Tom Poynton was left stranded on 58 not out.

Durham's fifth victory of the season moved them up to second in the Division One table, 11.5 points behind leaders Sussex, but with a game in hand.

Derbyshire were only able to add 11 runs with Poynton adding only two to his overnight score.

Clare went to the second ball of the day, dabbing at a short, wide one from Stokes to be caught behind, while Groenewald attempted to hook a short ball and was also caught by Mustard to give Rushworth match figures of 10-103.

Footitt backed away towards square leg and had his stumps splattered as Durham wrapped up victory inside 15 minutes on the final day.