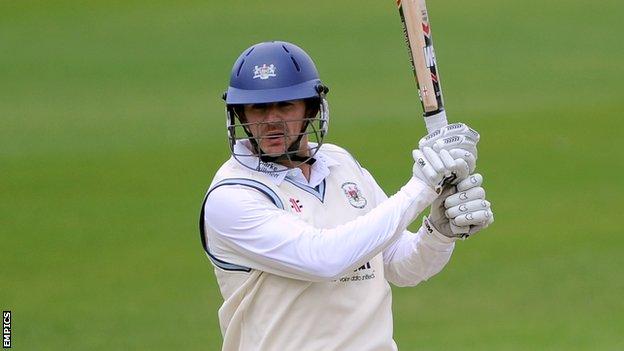 Gloucestershire's Alex Gidman hit a career-best double century and Hamish Marshall made a third ton this year as batsmen dominated at Cheltenham.

The early stages of day two belonged to Gidman, who resuming on 145, posted his highest ever first-class score of 211.

And when Marshall (106) was dismissed by James Tredwell, the hosts declared.

Marshall, who was England international Tredwell's first Championship wicket this season, became the third Gloucestershire player to score a century in the match.

This followed Chris Dent's 154 from the first day and the total posted by Gidman, who was run out by Brendan Nash after facing 347 balls.

In reaching his total, Gidman, whose previous best in a first-class game was 176, became the first Gloucestershire player to hit a double century at Cheltenham since Shaun Young in 1997.

Kent batsman Northeast, who remains at the crease with Nash, told BBC Radio Kent at close of play: "When you get an opportunity like this, you make sure that you make a big score. Hopefully the pitch will stay the same tomorrow, it's a very good batting wicket."

"Alex Gidman and his brother Will used to play on the outfield at Cheltenham College as schoolboys watching Gloucestershire, so it was wonderful that he scored his first double century and passed his career-best on the same ground.

"Whether his efforts will make any difference on a very flat track remains to be seen; although still 248 short of avoiding the follow on, Kent have made batting look comfortable.

"Gloucestershire will hope to make early inroads tomorrow, or else the game is in danger of finishing in a run gorged draw."

"The sun still shone and the runs still kept coming. During the course of Gloucestershire's mammoth total, Kent skipper James Tredwell celebrated his first county championship wicket of the season.

"In fairness, if Kent had batted first, the game position may have been no different as Kent responded positively with half centuries for both Rob Key and Sam Northeast, the latter undefeated on 79 at the close."