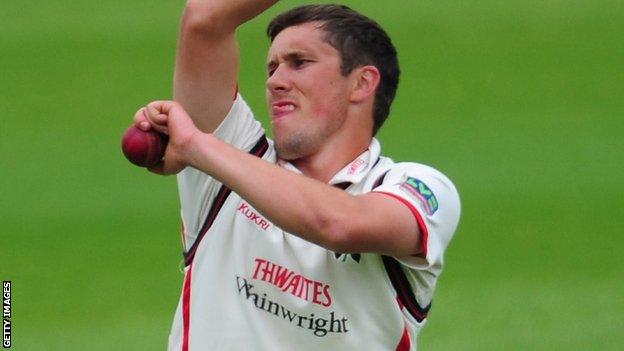 Spinner Simon Kerrigan took 7-63 as Lancashire beat Northants by eight wickets to replace them at the top of the Division Two table.

They were made to fight all the way by the home side, who survived for 47 overs before being bowled out for 241.

James Middlebrook top-scored with 75 and Andrew Hall resisted for 143 balls for 57 despite a bad back.

The manner of their their fifth victory of the summer was in marked contrast to their two-day home win over Northants last month, but it lifted them one point above their opponents, with a game in hand.

And Kerrigan's performance, which included four wickets in three overs as Northants slumped from 180-5 to 192-8, highlighted why he is seen by some as a future England player.

Two of his wickets were the result of catches at short-leg by Agathangelou, who later struck three sixes and six fours in his half-century before collecting the winning single off Lee Daggett.

Lancashire captain Glen Chapple told BBC Radio Lancashire: "I think it's an excellent win for us this week. On a really tough pitch to play cricket on. It's one of those pitches you have to work hard on and we've beaten a very good team.

"Simon Katich is a world-class player and Simon Kerrigan bowled well all game but it's about all 11 players, they all should take credit for it.

"It's one game at a time, we're playing with confidence at the moment and long may that continue."

"There was a small, but clear difference in quality between Lancashire and Northants over the last four days.

"Where home batsmen were able to go on beyond a start, Simon Katich made 200 and Simon Kerrigan provided the cutting edge which Northants lacked when they badly needed it.

"Lancashire are clearly the best side in Division Two, but Northants will fancy their chances of promotion too, especially if Trent Copeland comes back later in the season."