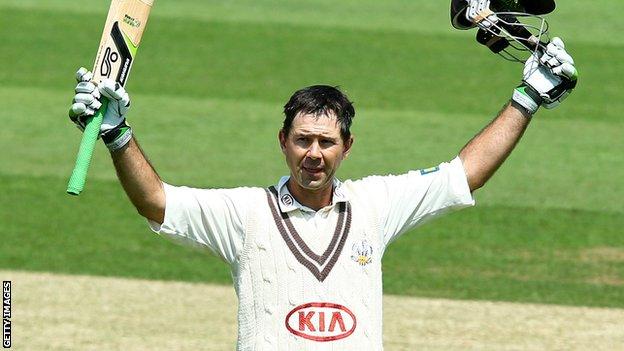 Ricky Ponting batted for the entire day in his final first-class innings to finish on 169 not out and help Surrey earn a draw against Nottinghamshire.

The former Australia captain batted sensibly to ensure his side, who had been in a precarious position, could declare on 395-8 to save the match.

At the close, every Notts player shook his hand as he left the field.

Ponting's innings came as his former Australian team-mates were fighting back against England in the first Test.

It was the second century in his short spell at Surrey after he hit 192 on his debut against Derbyshire.

Although he will not make any more Championship appearances, with South Africa's JP Duminy set to replace him as overseas player, Ponting will be playing one-day cricket for the county until the end of July.

And he will finish his career after appearing for Indian Premier League side Mumbai Indians in the Champions League, which ends on 6 October

Resuming on 41 not out, the 38-year-old Tasmanian lost partner Arun Harinath in the first over of the day, bowled behind his legs by Harry Gurney for 69, and two overs later Zander de Bruyn was run out.

When Steven Davies was bowled by Andre Adams, Surrey were 218-5 and just six runs ahead, but Ponting and Zafar Ansari shared a sixth-wicket partnership of 98 either side of the lunch interval to give their side hope of avoiding defeat.

The former Australia captain reached three figures before the break by dancing down the pitch to Samit Patel and hitting the spinner for his 14th four.

The 38-year-old took his time in the afternoon, but hit 10 off a Graeme White over to reach 142 not out at tea.

His efforts during the afternoon took Surrey to 356-8 - a lead of 144 with one session remaining.

Ansari (27), Gareth Batty (0) and Chris Tremlett, overlooked for the Test at Trent Bridge, all fell to Patel after tea but Jade Dernbach (18 not out) shared an unbroken ninth-wicket stand of 59 with Ponting, who left the field to a standing ovation.