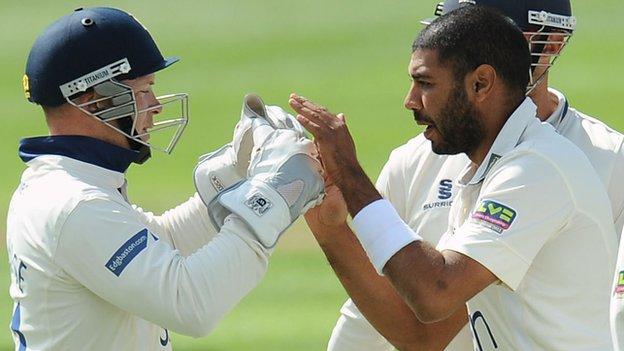 County champions Warwickshire eased their relegation fears with only their second win in nine matches this season.

But Jeetan Patel took three of the five wickets to fall as the home side were bowled out just before lunch for 286.

The Bears then made hard work of it on a turning pitch, taking 41 overs to make 111-5, winning by five wickets, wicket-keeper Tim Ambrose making 47.

Patel in the wickets again

When Corey Collymore nipped in to remove Ian Westwood, it was 21-3. But Ambrose saw his side almost all the way home, his controversial departure just before the end allowing Surrey old boy Rikki Clarke to come in and finish the job inside six deliveries, well into the final session.

Victory came at a cost for the Bears, who were without last season's leading wicket taker Chris Wright for half of the match.

After taking two wickets in the Middlesex first innings, he picked up a back injury that will rule him out of Friday evening's Pears-Bears Twenty 20 clash against Worcestershire at New Road.

Warwickshire, who are next in Championship action at home to Nottinghamshire on Monday, climb out of the drop zone to sixth in the table, 44 points clear of bottom side Derbyshire - and 16 clear of eighth-placed Surrey.

With seven matches left of the Championship season, they are 50 points off top spot - and 11 points behind fourth-placed Middlesex, who, after three Twenty20 fixtures, face leaders Sussex at Hove on Wednesday.

"Middlesex ultimately will look back to the first morning, to rue the two dropped catches offered by stand-in skipper Varun Chopra before he got off the mark.

The stand in skipper eventually made an unbeaten double ton and after an early clatter in the Middlesex innings it was a long way back.

Adam Voges scored more than 200 runs in the match on his Championship debut but when he fell on the final day there was only going to be one winner.

The defeat doesn't end Middlesex's title hopes but it does put a lot of pressure on next weeks trip to Sussex.

"The nervous way the Bears' top order approached chasing their modest target should not detract from a very good performance.

"They looked much more like the team that won the title last season. They batted big in the first innings, producing three century stands and avoiding losing wickets in clusters.

"The Bears attack, at full strength until Chris Wright dropped out with a back strain, was penetrating and patient, bowling out the opposition twice on a pitch which always favoured the batsmen.

"Now Warwickshire have to try to improve their wretched form with the white ball."