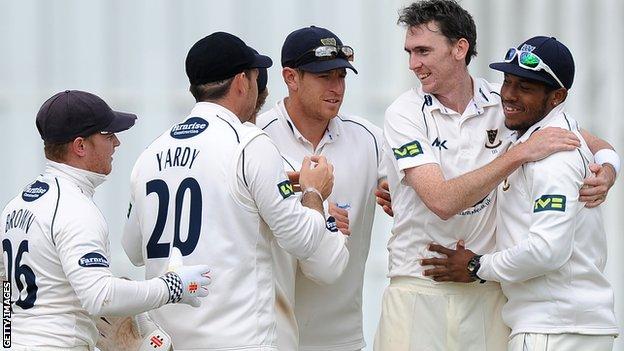 Steve Magoffin had match figures of 8-101 as Sussex beat Somerset with five sessions to spare at Taunton to move to the top of the Division One table.

The Australian took two of the three wickets to fall to finish with 4-36 as Somerset were bowled out for 209.

Acting skipper Chris Nash made an unbeaten 61 as they cruised to 92-1 for a convincing nine-wicket win.

It also gave them a seasonal double over Somerset, having thrashed them by an innings and 116 runs at Hove back in May.

Magoffin took 12 wickets in that match and soon put an end to any hopes the Cider Men might have harboured of prolonging this game well into the third day and beyond.

He only needed five balls to remove Alfonso Thomas and after Chris Jordan accounted for Peter Trego - the ninth Somerset batsman caught behind by Ben Brown in the match - Magoffin ended Somerset's resistance by bowling Jamie Overton.

Sussex's openers Nash and Luke Wells and set out with the intention of wrapping things up, producing a flurry of boundaries off fast bowler Steve Kirby.

Although he dismissed the latter for 19, caught at third slip, Nash hit a four and six off successive deliveries from spinner George Dockrell to finish the job in the 20th over.