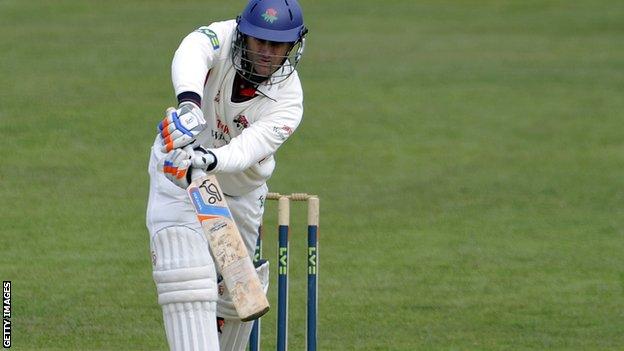 Left-arm seamer David Willey was the pick of the Northants attack, removing Chapple to end with figures of 5-108.

It had looked as if Lancashire's lead would be small after the loss of four wickets for 17 runs during the morning, three of them to Willey, saw them stumble from 291-4 to 308-8.

But Katich, who batted for more than eight hours in total. and Chapple had other ideas and after they were finally all out, the latter was soon causing problems with the ball as Kyle Coetzer was well caught by Karl Brown at third slip for 10.

David Sales (30) and James Middlebrook added 50 before Sales was bowled by a well-flighted delivery from left-arm spinner Kerrigan, who also pierced the defences of Ben Duckett (24) and Cameron White in the day's final overs - Middlebrook surviving on 46 not out.

"Northants have it all to do on the final day if they are to avoid a double defeat by Lancashire and hang on to the initiative in the Division Two title race.

"Simon Kerrigan will be a real handful bowling to significant rough outside the off stump.

"It will be a real achievement if Northants get away with a draw."

"Australia's loss was most definitely Lancashire's gain with Simon Katich looking in imperious form as he made his first double century in England since 2007 in England, and the first by a Red Rose player since 2008."

"Late wickets from Simon Kerrigan certainly swung momentum the way of the visitors, but there was bad news for them after learning that Stephen Parry, who is not playing in the game, but broke his left forearm in the nets, will be out for 12 weeks."