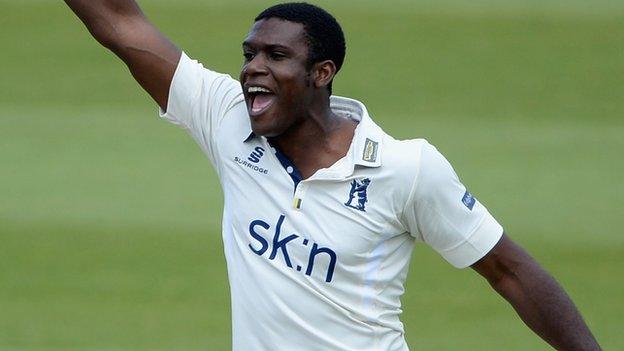 Warwickshire paceman Keith Barker led the way at Uxbridge with another four wickets in the day as the Bears enforced the follow-on to bowl themselves into a winning position.

Resuming on 177-4, Australian Adam Voges was the key man for Middlesex, taking his overnight 82 to 150.

After Edgbaston's success in June as the main Champions Trophy stage, accommodating 105,000 spectators over the course of five matches, Warwickshire have been awarded an extra Twenty20 international next summer.

Edgbaston, was already scheduled to host one-dayers against India and Sri Lanka in 2014 - but they have now been awarded a T20 against India.

Bears chief executive Colin Povey said: "England have a fantastic record at Edgbaston. We're thrilled to welcome them back to Birmingham.

"The £32million redevelopment of the stadium was designed to give the best possible cricket experience to players, spectators and officials.

"The ICC Champions Trophy showcased these facilities on the world's biggest stage and being allocated this match is a welcome reward to the fans who gave such great support."

Barker then took two more, as did Boyd Rankin, as Middlesex closed on 147-5.

Bears spinner Jeetan Patel also took four wickets in the Middlesex first innings, including the key scalps of Simpson and Voges, who was second to last out after putting on 72 for the ninth wicket with Ravi Patel to steer his side within 38 runs of saving the follow-on.

But, despite Jeetan Patel having so far proved wicketless from his 17 overs in the second innings, the home side still need another 30 runs to make Warwickshire bat again.

Sam Robson (29), Joe Denly (37) and Neil Dexter (36) all got out after making decent starts, but the home side do at least still have Voges at the crease.

He lost first innings partner Simpson just before the close, but Voges registered his intentions, having so far stayed 83 minutes for an obdurate 15.

Barker has now taken 22 wickets in five Championship matches since making a delayed start to the season following injury.

"Middlesex have it all to do tomorrow if they are to avoid defeat after losing 11 wickets. Warwickshire's attack has been relentless, giving their opponents little room for manoeuvre even when partnerships have got going.

"Adam Voges was magnificent and faultless up to his dismissal, which crucially came 38 runs short of the follow-on target.

"The hosts have lost wickets in clutches but will need to make the most of every partnership that remains if they're to bat for another two sessions to give themselves a chance of saving the game."

"Warwickshire have a great chance of reaping the rewards of two positive decisions.

"First, they declared earlier than expected and then, after establishing a first innings lead of 177 they enforced the follow-on at the risk of having to bat last on a potentially turning pitch.

"So far the pitch has continued to play fairly well, with Bears spinner Jeetan Patel making the most of limited assistance."