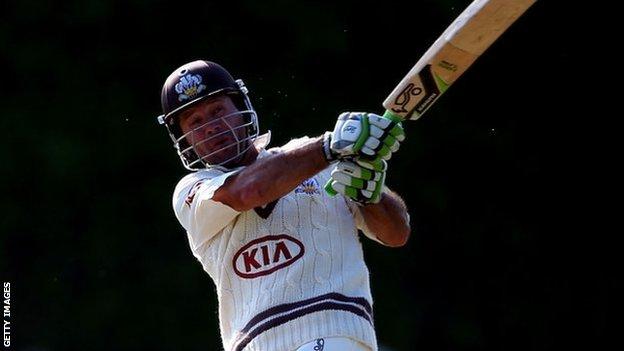 Ricky Ponting, in his last first-class innings, and Arun Harinath shared an unbroken third-wicket stand of 97 to help Surrey fight back against Notts.

Samit Patel had earlier moved from his overnight 87 not out to make 110 but the visitors' last four wickets only added 50 as they were all out for 410.

It gave them a first innings lead of 212, but Surrey responded well.

Ponting scored the 24,000th first-class run of his career when he reached 19 and batted for 137 minutes after being applauded to the crease by the Nottinghamshire players.

After some careful batting in which he only hit three fours, the former Australia captain hit out in the penultimate over by taking two boundaries off Harry Gurney.

Harinath, who shared an opening stand of 70 with Rory Burns (38), but was involved in a mix-up with Vikram Solanki, which saw the former England one-day player run out for 11.

He kept his composure, however, and filled the anchor role for 71 overs after Patel had earlier completed his 17th first-class hundred from 184 balls.

"Another riveting day of Championship cricket and Surrey have forced their way back into the game.

"With Ricky Ponting unbeaten on 41 in his final first-class innings and Arun Harinath 69 not out, the home side finished the day trailing by just 26 runs. It sets up a very interesting final day in South London tomorrow.

"Nottinghamshire posted 410 as Samit Patel moved to a well-deserved century in the morning. The efforts of Jade Dernbach with the ball saw the lead kept to 212 and Ponting and Harinath combined for an unbroken third wicket stand of 97 to dominate the afternoon.

"Ponting moved past 24,000 first-class runs and he will be wanting to add some more to his tally tomorrow as the curtain will come down on his magnificent career in the longer form of the game."