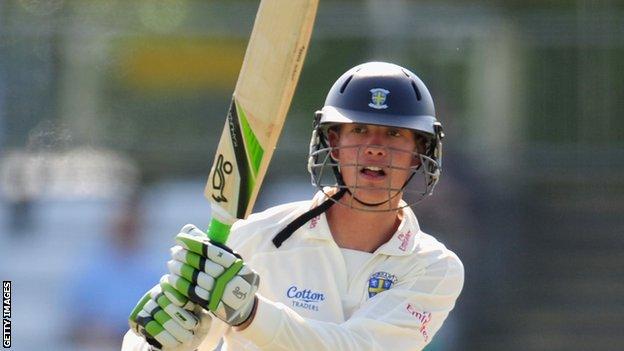 Keaton Jennings hit his maiden Championship century to help Durham close in on a comprehensive win over Division One's bottom side Derbyshire.

Jennings continued to display the form he showed in the first innings, when he made 93, reaching a steady 100 off 247 balls before finally falling for 123.

Shivnarine Chanderpaul top scored with 76 in reply, however his side closed on 181-7 still needing another 291 to win.

The early stages of Derbyshire's second innings looked to be going much the same way as the first, when they were all out for 113, as they lost three wickets in three overs with Richard Johnson, Wayne Madsen and Chesney Hughes falling to leave them at 20-3.

Chris Rushworth, who had first innings figures of 6-64, then began to search out the middle order, dismissing Dan Redfern (4) and Wes Durston (5) to leave the visitors sitting precariously at 49-5.

Former West Indies captain Chanderpaul formed a sterling 98-run partnership with Tom Poynton (56 not out) to give Derbyshire hope of seeing out the match.

But the former fell to the impressive Rushworth for his ninth wicket of the match and the visitors, still winless in the Championship this season, go into the final day in a precarious position.

"It was another good day for Durham who are poised to wrap up their fifth win of the season.

"A number of national newspaper writers had them finishing bottom this summer, but they are showing the sort of form that should keep them in the hunt for silverware come the end of the campaign.

"Keaton Jennings has scored 216 runs in the match, including 123 in the second innings, and Chris Rushworth - the man nominated to step aside should Graham Onions have returned from England - has taken a career-best match haul of nine wickets and can still get the 10 on the final day."