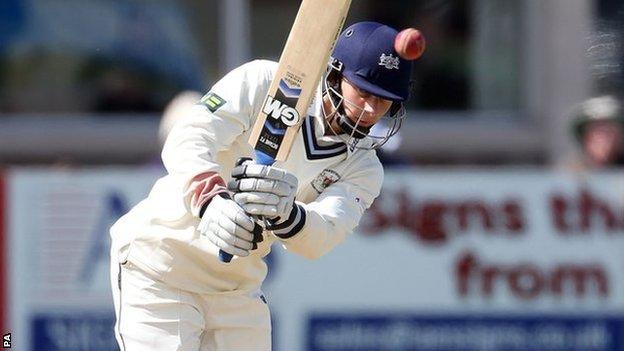 Chris Dent and Alex Gidman each made a big century as Gloucestershire reached 348-3 on a very one-sided opening day against Kent at Cheltenham.

Dent was out late in the day for 153, the highest score of his career, while Gidman was unbeaten on 145.

They came together after Calum Haggett removed Michael Klinger (20) and Dan Housego (13) to leave the hosts 74-2 and shared a third-wicket stand of 267.

Haggett (3-57) also accounted for Dent when he had him caught behind.

Dent batted for 351 minutes, faced 270 balls and hit 17 fours and two sixes, but paid the penalty for a late rush of blood when he flashed at a wide delivery and wicketkeeper Geraint Jones took the catch.

Gidman had two slices of good fortune on 38 and 58, with Brendan Nash unable to cling onto a catch at cover off Darren Stevens, and Stevens himself putting down a diving chance at point, with Vernon Philander the unlucky bowler.

Kent have yet to win a game this season and skipper James Tredwell said: "We dragged it back, bowled well in periods, but didn't string it together for long enough."

"There are fewer nicer places to watch cricket than at Cheltenham and those that came to the first day of the festival soaked up the sun and some sumptuous scoring from Gloucestershire's Chris Dent and Alex Gidman.

Kent's attack, after Haggett had made a promising early start with the ball, were made to toil and although he got back into the act by claiming the scalp of Dent as his third victim, it was only after the batsman had scored a career-best 153.