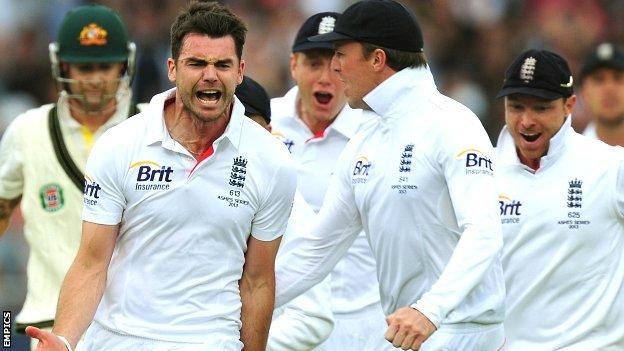 England fought back brilliantly with the ball after disappointing with the bat on an astonishing opening day of the Ashes series at Trent Bridge.

In a riotous final session, the hosts lost their last four wickets for two runs in crumbling to 215 all out before tearing through Australia's top order with the new ball to reduce them to 75-4.

Peter Siddle was Australia's outstanding performer on an overcast day which offered plenty of assistance to swing bowlers, removing five of England's top seven to finish with figures of 5-50.

But Steven Finn dismissed Shane Watson and Ed Cowan in successive balls and James Anderson took two wickets of his own to leave the match beautifully poised, with Steve Smith on 38 not out.

If England can dismantle the remainder of the Australian batting order on Thursday, they could yet escape with the first innings lead they were targeting when captain Alastair Cook won the toss and chose to bat on a dry pitch hardened by several days of sunshine.

It was a decision that appeared justified as the hosts found the boundary 19 times in the first session and advanced to a promising 178-4 in the afternoon.

But a combination of poor shot selection and fine swing bowling saw them lose their last six wickets for 37 runs to round off an innings that had lasted just 59 overs.

With Stuart Broad off the field receiving treatment to a shoulder injury he suffered while batting, Australia began their innings positively. Watson struck successive fours off Finn as they took the total to 19 off as many balls.

But the Middlesex fast bowler gained his revenge with a double strike as first Watson, then Cowan were drawn into chasing balls outside off stump, sending thick edges through to a gleeful England slip cordon.

If Finn's intervention had altered the course of the match, Anderson was about to turn things full circle with the wicket of Michael Clarke for a six-ball duck.

"Steve Smith surprised me - without being nasty, he looks like a good club batsman. He is not technically correct like Michael Clarke but the way he played today was excellent. He stayed back to the seamers and then gave it a club when he got chance. He could take the game away from England tomorrow if he gets in."

Listen to the TMS Podcast

The Australia captain, averaging 66 in his 24 previous Tests as skipper, was beaten by a ball that moved away at the last moment and kissed the top of his off stump.

Anderson's 308th Test wicket took him past Fred Trueman into third on England's all-time list, and his 309th followed soon afterwards as Chris Rogers was trapped lbw to a ball which replays revealed would have brushed the outside of leg stump.

It was a breathtaking finale to a day that began with fireworks and a fly-by from the Red Arrows to mark the renewal of hostilities in one of sport's oldest rivalries.

Australia sprung a huge surprise before the start of play by handing 19-year-old spinner Ashton Agar his Test debut at the expense of Nathan Lyon.

The tall left-armer, of Sri Lankan background, had only played 10 previous first-class matches and was lining up in the Home Counties Premier League for Henley earlier this season.

James Pattinson, one of five Australians playing in their first Ashes Test, was given the responsibility of delivering the first ball of the series. But as a hush descended over the 17,000 fans inside a sold-out Trent Bridge, the 23-year-old sent down a high and wayward bouncer that was rightly called a wide.

At 19 years 269 days Agar is the 13th youngest player to play for Australia and the third teenager since Doug Walters in 1965. (Craig McDermott and Pat Cummins are the other two). He is the 17th player to bowl spin for Australia in the 68 Tests since Shane Warne retired. The most successful is Nathan Lyon - the man Agar ousted from the line-up - with 76 wickets at 33.18.

Left-armer Mitchell Starc delivered a similarly inauspicious first over, but once their nerves settled Australia's new ball pair found plenty of swing and beat the bat with regularity.

Pattinson claimed the wicket of the England captain in the ninth over as Cook aimed a forceful shot at a ball outside off stump and got a healthy nick through to wicketkeeper Brad Haddin.

Joe Root had appeared equally assured in a partnership of 51 before he was clean bowled by a superb away-swinging yorker from Siddle.

Kevin Pietersen and Trott followed soon after lunch, the former edging an expansive shot to second slip for 14 and the latter deflecting an equally reckless drive on to his stumps.

Ian Bell and Jonny Bairstow revived England with a counter-attacking partnership of 54, but the wicket of Bell - caught at first slip off another fine delivery from Siddle - proved pivotal as England's lower order folded miserably.

Matt Prior lazily slapped Siddle to point for one and Broad top-edged a pull shot to gift Pattinson the simplest of caught and bowled dismissals.

Bairstow was bowled after playing around a full ball from Starc, with Finn caught behind off the following delivery.

Anderson survived Starc's hat-trick ball but in the following over Graeme Swann prodded tamely to cover to complete the rout.