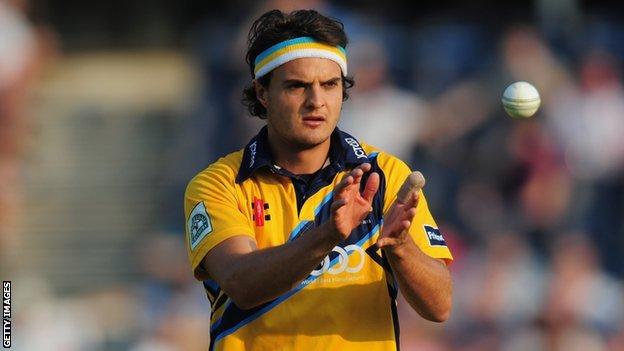 Jack Brooks took 5-21 as Yorkshire beat Leicestershire by seven wickets to earn their first FLt20 win of the season.

Brooks dismissed the first five visiting batsmen to reduce the visitors to 38-5 and they never recovered.

It was only due to an eighth wicket stand from Rob Taylor (16) and Anthony Ireland (23) that they reached three figures, limping to 113-9.

Dan Hodgson led the way for Yorkshire with an unbeaten 52 as they cruised to victory with 19 balls remaining.

The best Twenty20 bowling figures of Brooks' career were the key to his side's success.

Leicestershire's batsmen could not cope with him, with Greg Smith and Matthew Boyce each falling for a duck and Joe Burns only making four.

Ned Eckersley started a mini-revival with 26 before Taylor and Ireland lifted the total beyond 100.

Ireland gave the visitors hope when he removed Phil Jaques for only nine but solid batting from Joe Sayers (28) laid the foundations for Hodgson and Gary Ballance (21 not out) to see Yorkshire home.

The win took Yorkshire up to fourth in the six-team North Group, one position above Leicestershire.