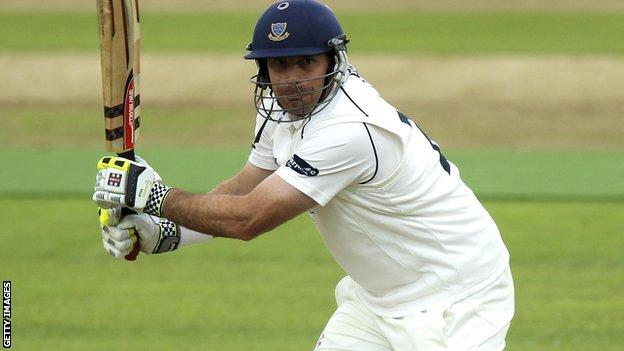 Sussex were on course for victory after day two against Somerset at Taunton despite collapsing after centuries by Michael Yardy and Matt Machan.

Trailing by 119, Somerset soon lost skipper Marcus Trescothick for his fourth duck in the space of five days.

Somerset had the chance to restrict Sussex to a double-figure first-innings lead, but Yardy was dropped twice during the morning session as he completed a 99-ball century.

Machan brought up his maiden first-class hundred off 138 deliveries, with a six and 13 fours, but was soon caught off Craig Meschede, who followed up with the wicket of Rory Hamilton-Brown to spark the collapse.

Yardy was eventually bowled by Jamie Overton and Luke Wright (25) and Ben Brown (17) were the only other batsmen to make double figures as Sussex fell short of maximum batting points.

When Somerset batted again, Trescothick departed third ball, caught behind off Anyon as he had been in the first innings, to continue a dismal run which began with a golden duck in a Twenty20 game against Gloucestershire last Friday.

Nick Compton's disappointment at losing his England place was compounded when he followed a first-innings duck by managing only seven before being bowled by Steve Magoffin, and Anyon picked up three more wickets before the close to leave Sussex poised to take top spot in the Division One table.