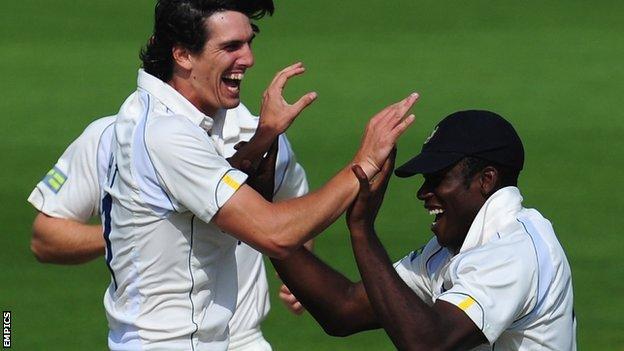 Middlesex rallied well in their bid to save the follow-on despite Warwickshire taking four wickets in 10 balls.

Tim Ambrose weighed in with 60 before Chopra unselfishly declared on 486-6.

Chopra at the double

Keith Barker and Chris Wright then took two quick wickets each before the game's highest stand between Adam Voges (81 no) and John Simpson (50 no) helped the hosts recover from 28-4 to 177-4.

They have so far put on 149, leaving Middlesex still needing a further 160 to avoid being asked to bat again.

Middlesex's frustrations at having such a large total to chase were enhanced by having twice dropped Chopra before he had scored on the first morning.

In the end, Chopra denied himself the chance to surpass the best score of his career (233 not out for Tamil Union in Sri Lanka two winters ago), also leaving him 14 runs short of his 1,000 first-class runs this summer.

But, when Middlesex batted, Bears all-rounder Jeetan Patel showed them how to do it with three successive catches at third slip as the visitors made early inroads.

Simpson had to survive a hat-trick ball from Wright, but the number six, together with Australian Voges, steadied things for the hosts.

"Having declared their first innings, Warwickshire produced an inspired eight overs with the ball before tea to reduce Middlesex to 28-4.

"Chris Wright and Keith Barker made everything they could of the new ball at that point and produced some gems to pile the pressure on. The dismissals in that short passage of play were all catches, which will be a point not lost on the hosts following the chances they put down.

"The match reverted back to its normal pattern on a slow and low track after the interval, but huge credit must go to Adam Voges and John Simpson for their composure in an extremely uncomfortable position. Their partnership has given Middlesex the foundation to bring some balance back to the game."

"Varun Chopra's decision to forgo the chance of reaching a new career best proved a masterstroke.

"Warwickshire wanted half an hour before tea to have a go at Middlesex and they could hardly have expected to take four wickets in that time.

"That spell, however, was uncharacteristic of the way the Uxbridge pitch has played and it will be difficult for the bowlers of either side to prevent the game ending in a draw."