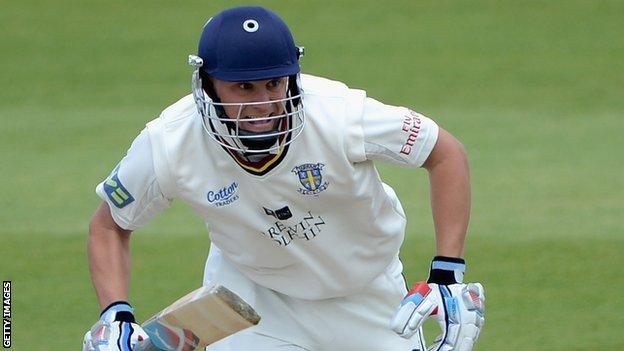 The visitors, resuming on 15-1, could not cope with seamer Rushworth, who finished with 6-64 as Durham skittled their opponents for 113.

Derbyshire narrowly avoided the follow-on, but Borthwick's innings, including 16 fours, intensified the pressure.

The north east county were on top of their game from the start with Rushworth, who was only just outside his career-best of 6-58, polished off Derbyshire's first innings in just 41.1 overs, assisted by Callum Thorp (2-11) and Mark Wood (2-18),

A clear indication of Derbyshire's below-par effort was the fact that David Wainwright's 18 not out from 56 balls was the highest score in their innings.

Tim Groenewald had opener Mark Stoneham lbw for 10 as Durham began their second innings, but Borthwick began to find the boundary with regularity and built a strong partnership with Jennings.

Borthwick reached his century off 117 balls before part-time spinner Dan Redfern finally made the breakthrough by winning an lbw decision against the left-hander.

"Durham appear to be in complete control. Between tea on day one and mid-afternoon on the second day, 17 wickets fell for 166 runs.

"Then sanity arrived in the shape of Scott Borthwick, who hit a career-best 117 and Keaton Jennings, who will resume on day three on 65 after reaching his second half century of the game.

"They put on 168 for the second wicket and at the close Durham led by 348 at 208-2 in their second innings. Earlier Derbyshire were out for only 113 and looked a sorry side. Surely they can't be as bas as that twice in the one match?"