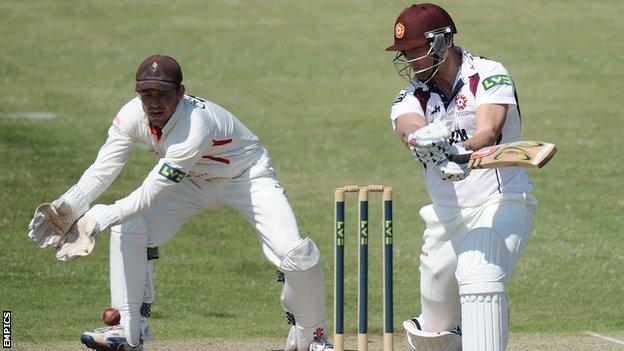 Division Two leaders Northants fought back from an afternoon collapse to reach 275-7 on day one against Lancashire at Wantage Road.

After losing inside two days at Old Trafford last month, they slumped from 90-0 at lunch to 159-5, with James Middlebrook was run out for 57.

The omens were not good for Northants at the start of play when skipper Alex Wakely, who has only been doing the job because of Stephen Peters' finger injury, was ruled out after a back spasm.

That meant former captain David Sales was asked to lead the team again, but he was among Chapple's victims in the afternoon session before White, making his first Championship appearance of the summer, steadied the ship with a composed knock, which included seven fours.

Northants were untroubled before lunch, but Glen Chapple's three wickets threatened to put Lancashire on top before an excellent rearguard led by Cameron White kept the home side in the game.

"Karl Brown's bad drop of David Murphy off Chapple in the closing overs of the day may yet prove costly."

"Lancashire will feel pleased with their efforts on the first day, having taken seven wickets for 185 runs after the home side were 90-0 at lunch.

"On a hot day, they were made to work hard for their wickets on a pitch that looked good to bat on.

"Three quick wickets on the second morning to limit Northants to not much more than 300 and the Red Rose will feel they hold a slight advantage."