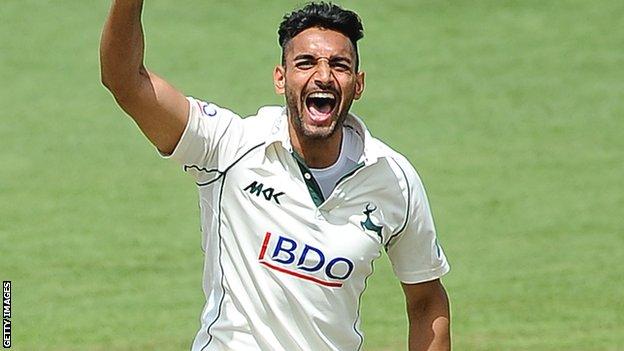 Ajmal Shahzad returned his best figures since joining Nottinghamshire as Surrey were skittled out for 198 at The Oval.

Rory Burns (57) gave the home side a solid start, but wickets fell regularly, including Ricky Ponting for 29 in his final first-class match.

Shahzad took 3-43, while Graeme White and Harry Gurney had two wickets each as Surrey's Steven Davies was left stranded on 65 not out.

Notts were 50 without loss in reply at the close, trailing by 148 runs.

Openers Riki Wessels and Steven Mullaney were both unbeaten on 22.

Stand-in skipper Gareth Batty won the toss for Surrey and elected to bat, but then saw Arun Harinath caught low at second slip by Patel off Shahzad for four in the sixth over.

Vikram Solanki followed, trapped leg before to a low delivery from Andre Adams, who had just changed ends, before Burns and Ponting put on 51 for the third wicket.

Gurney struck in the final over before lunch when Burns was caught down the leg side by wicketkeeper Chris Read to leave the hosts on 93-3.

Following the resumption, Patel had Ponting caught at short leg by Wessels before Zander de Bruyn flashed at a ball outside the off stump to become Shahzad's second victim.

White, playing his first Championship match of the season, had Zafar Ansari caught by Wessels and Batty fell to Gurney for a third-ball duck straight after tea.

Davies brought up his 50 from 85 balls but the decline continued, the last five Surrey wickets going down for 25 runs and the last four batsmen departing without scoring, Shahzad finishing off the innings with the dismissal of Gary Keedy.

"A very good opening day for Nottinghamshire and especially their bowlers after Surrey had won the toss.

"Only Rory Burns and Steven Davies got to grips with the visiting attack, although Ricky Ponting was looking very assured until he was out for 29.

"Every Nottinghamshire bowler made a contribution, with Samit Patel and Ajmal Shahzad the pick. And the way Riki Wessels and Steven Mullaney batted showed that Surrey's first-innings effort of 198 was below par."