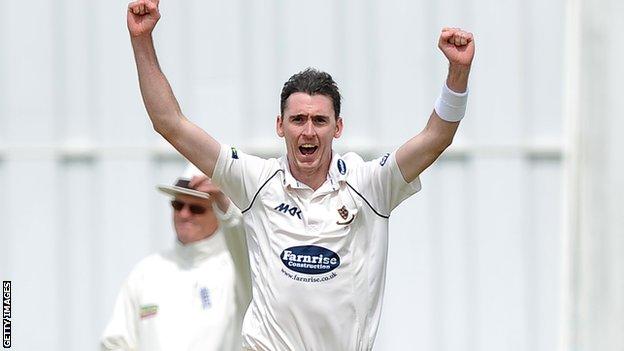 The home side never really recovered from losing openers Marcus Trescothick and Nick Compton for ducks.

Wicketkeeper Ben Brown took five catches as they were all out for 244 in 63 overs despite James Hildreth (66) and Craig Kieswetter (55) batting well.

Sussex also lost two early wickets, but Yardy (94no) and Matt Machan (58no) counter-attacked to see them to 174-2.

It was exhilarating batting by the third-wicket pair, who struck 27 boundaries between them in a partnership of 166 in 26.3 overs that was more appropriate to white-ball cricket, to leave Sussex just 70 behind at the close.

The visitors came into the game in second place in Division One, just eight points behind leaders Yorkshire, who are not involved in the current round of matches.

Although skipper Ed Joyce is absent because of international commitments with Ireland, their hopes of taking top spot received an immediate boost when Trescothick was caught behind off the second ball of the game before England discard Compton edged Magoffin to first slip in the next over.

Magoffin was well supported by James Anyon (3-61) and, although their leading wicket-taker Chris Jordan came in for some punishment from Hildreth and Kieswetter, he rallied well to finish with 2-65.

"Another lethal display by Sussex, but an intriguing decision by Somerset skipper Marcus Trescothick to bat first.

"Sussex took full advantage on a very green wicket, after grabbing both openers for ducks, Steve Magoffin proving the pick of the bowlers.

"Sussex were at one stage 8-2 themselves, but Michael Yardy and Matt Machan dug deep and attacked the wayward Somerset bowling attack."