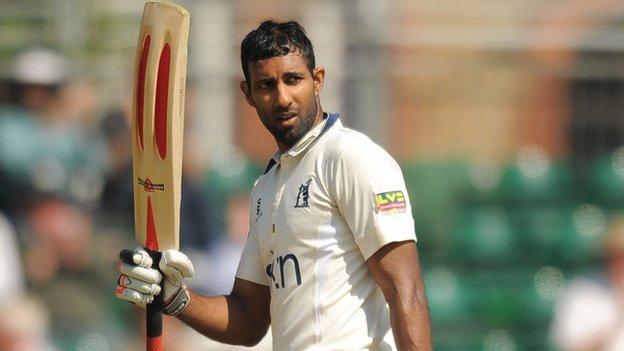 Dropped twice early on, Chopra batted all day at sunny Uxbridge, hitting an unbeaten 141 out of the Bears' 269-2.

The Bears opener, deputising as captain for the injured Jim Troughton, put on 113 for the first wicket with former skipper Ian Westwood (65).

And Chopra put on another 113 for the second wicket with Laurie Evans (37).

Chopra was then joined by Ateeq Javid, the pair having so far added a further 43 for the third wicket.

Spinner Ravi Patel did most to ensure that Warwickshire's scoring remained no more than steady throughout the day, the slow left-armer's 29 overs going for just 49 runs.

"Middlesex were left to rue dropping Chopra twice in the slips when he had yet to get off the mark, as the visitors dominated on a batsmen's track.

"Toby Roland-Jones struggled to hide his disappointment as a total of three chances went down off his bowling in the morning session.

"Ravi Patel bowled magnificently and, even at this early stage, it's apparent that slow bowlers will hold the key as this match progresses and the pitch begins to wear."

"Jim Troughton has lost some important tosses this season but this was a good one for understudy Varun Chopra to win.

"The pitch has been playing slow and flat in the hot sunshine and Chopra has led the way towards accumulating a big total.

"There's been some hint of variable bounce and Warwickshire will hope there's some turn as the game progresses."