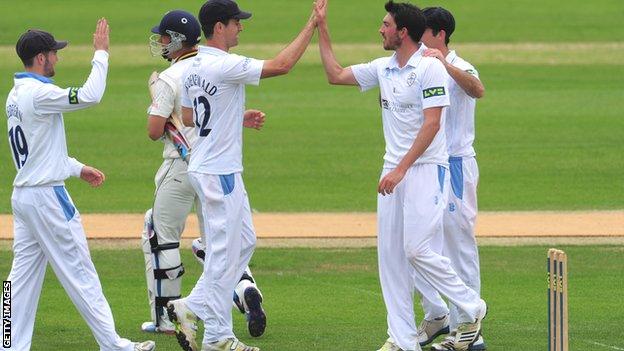 Mark Footitt took career-best figures, including three wickets in five balls, as Derbyshire hit back on day one against Durham at Chester-le-Street.

But, after Jennings fell seven runs short of a first County Championship century, Footitt (6-53) created havoc as the hosts slipped to 253 all out.

Near miss for Footitt

Chris Rushworth struck second ball as Chesney Hughes was trapped leg before, before Richard Johnson and Wayne Madsen saw Derbyshire to the close.

Earlier, Mark Stoneman, captaining Durham in the absence of Paul Collingwood, fell to the last ball of the third over of the morning when he chipped Footitt to Johnson at mid off for three.

Scott Borthwick made a rapid 22 before being trapped lbw by Footitt, but Will Smith and Jennings added 70 for the third wicket to put Durham in a good position.

When Tim Groenewald (2-52) picked up two wickets in eight balls to get rid of Smith (43) and Michael Richardson, Derbyshire sensed a fightback.

Mustard and Jennings initially put paid to that, but the dismissal of the latter by Wes Durston (2-29) sparked a spectacular collapse as five wickets fell for the addition of only 19 runs in seven overs before Footitt wrapped up the innings by bowling Rushworth for four.

"Derbyshire bowler Mark Footitt helped himself to a career-best as he steamed his way through the Durham middle order and tail.

"Durham lost their last six wickets for 31 runs in 11 overs.

"The collapse began when Keaton Jennings went for 93 to Wes Durston, just before the new ball was due."