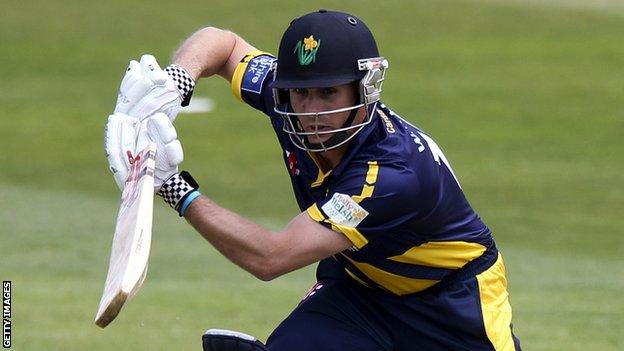 Mark Wallace hit an unbeaten 69 to guide Glamorgan to victory over Warwickshire and maintain their unbeaten start in the FLt20.

Warwickshire were restricted to 126-8 at Rugby, with Varun Chopra (30) top-scoring as Michael Hogan returned figures of 3-11 for the visitors.

Glamorgan looked comfortable with the bat despite losing Jim Allenby (24) and Chris Cooke (19) in their run chase.

Murray Goodwin (17no) hit the winning runs with a six off Laurie Evans.

Glamorgan, with three wins from three, move to the top of the Midlands, Wales & West Group while Warwickshire have now lost their opening three games.

Edward Bevan of BBC Radio Wales: "This was a wonderful performance by the Glamorgan bowlers. Michael Hogan was quite incredible, his figures of 3-11 from four overs reflect the excellence of his bowling.

"A quick opening stand of 33 between Allenby and Wallace set the tone for the chase, and Wallace's innings of 69 was a match-winner as they won by eight wickets with 14 balls to spare."