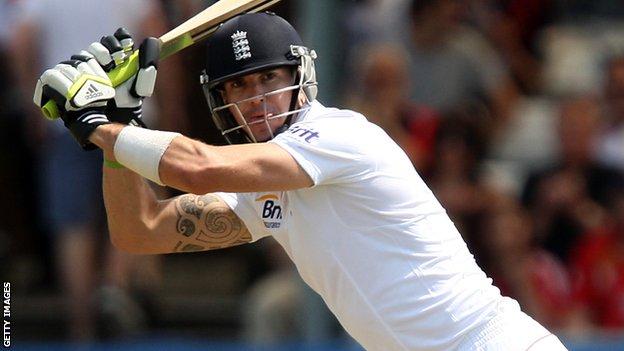 Former Australia batsman Damien Martyn says Kevin Pietersen is the player the tourists fear most in the Ashes series.

England batsman Pietersen, 33, hit a century on his return to action from injury for Surrey last month.

Martyn, who played 67 Tests from 1992-2006, said: "Pietersen's got that X-factor. He hasn't played much cricket but he's like Shane Warne - he loves the big moments and Ashes series."

He added Aussie hopes had risen after Darren Lehmann's appointment as coach.

"The personnel hasn't changed but the attitude and the atmosphere have changed within that playing group.

"He has a nice balance between fun and a very serious side to him.

"He will trust and back his players to go out there and play fearless cricket and any coach that can create an environment where players feel comfortable to express themselves is a positive.

"On paper, England are far superior but the Ashes are quite unique and players who are relatively unknown can emerge.

"I would never write off any team in an Ashes contest."

Before his Surrey return, Pietersen had been out with a knee injury since England's drawn second Test against New Zealand in Wellington in March.

Martyn, 41, said: "There's only certain players that you can fear and they're the Pietersens, the (Brian) Laras and (Sir) Viv Richards.

"In Pietersen you can sense he can win a game in a session - he's dangerous."

England go into the first Test at Trent Bridge on 10 July as favourites, but former Leicestershire and Yorkshire player Martyn says confidence has increased in the Australian ranks following their change of coach.

Former boss Mickey Arthur was sacked just 16 days before the start of the Ashes series and replaced by Australia A coach Lehmann.

Martyn said: "We're starting to believe that we can win this, we can compete with England and pull off a win.

"In Australia, there's a huge buzz now the coach has changed. There's a lot more excitement.

"Lehmann's said 'we're all judged on performances'. If he doesn't perform he'll go, like a player. In time we can judge these players and the coach."

England seamer Steven Finn said the change of coach could give new life to an Australian side whitewashed 4-0 by India in March.

"The change in coach might invigorate them and give them a new lease of life and we've got to be ready for that," he said.

"We know that Australia have a very dangerous bowling attack and they're capable of taking 20 wickets a game, so we're going to have to be ready to deal with it."

Live radio commentary from Test Match Special (TMS) on the Ashes will be available on BBC Radio 4 LW and BBC Radio 5 live sports extra, the BBC Sport website and via the BBC Sport app and iPlayer radio app.