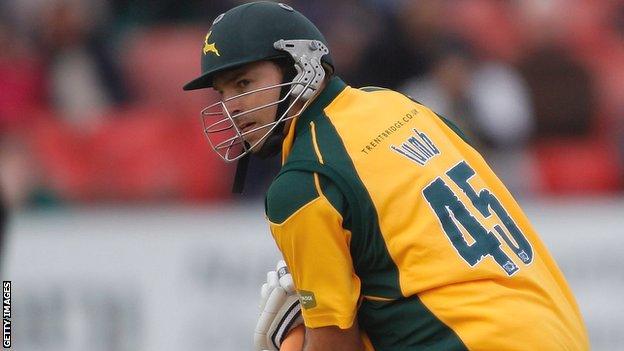 Derbyshire made a slow start as Jake Ball (2-20) impressed early on.

Will Madsen top scored with 36 in the hosts' 115-9 before being superbly run out by Chris Read, while Samit Patel (3-16) took two wickets in two balls.

Lumb was run out one short of a second T20 half-century in three matches, while James Taylor (34) helped guide Notts to victory on 116-4.

Earlier, Derbyshire slumped to 9-2 with early wickets for Ian Butler and Harry Gurney, but Madsen set about rebuilding the innings and hit four fours in 28 balls at the crease.

His dismissal saw Derbyshire slump from 64-3 to 84-8, before David Wainwright's unbeaten 15 pushed them above 100.

Notts made a solid start in reply but Wainwright (3-21) took two wickets in two balls to get rid of Alex Hales (10) and Riki Wessels.

Lumb smashed one six and six fours from 41 balls, but a mix-up with Taylor led to his downfall.

Taylor soon followed leg before to Wainwright, before Patel hit the winning runs to guide Notts to their third straight victory with 15 balls to spare.