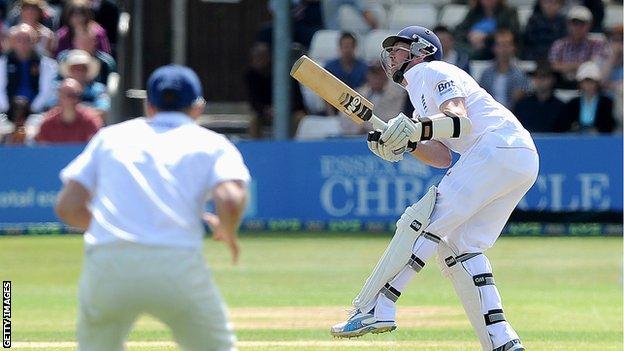 England off-spinner Graeme Swann looks set to be fit for the Ashes after escaping a serious injury in the warm-up match against Essex.

Swann, 34, was struck on the right arm while batting on day two at Chelmsford and was subsequently sent for an X-ray.

But an England and Wales Cricket Board tweet said: "X-ray showed no fracture. He is receiving treatment and will return to the field later in the game."

The first Test against Australia begins at Trent Bridge on 10 July.

Swann was hit on the right forearm by the left-arm pace of Tymal Mills, but continued batting after receiving treatment.

Mills, who on day one was regularly bowling at speeds above 90mph, said: "I didn't think that I had put him out of the Ashes.

"I've spoken to him since and there's no hard feelings.

"We laughed and joked. It's just bruising so if it had been different I'm sure I would have got another response."

Swann eventually fell for 94 in England's total of 413-9 declared, in which Tim Bresnan made an unbeaten 105.

"I wasn't concerned," said Bresnan, who was batting with Swann at the time and was hit on the helmet by Mills later in the same over.

"I could see that he could grip the bat and move his wrist, meaning it wasn't broken. It will just be quite sore.

"Injuries are part of the game but you don't want them in these sorts of matches when we're preparing for a big series."

Swann did not take the field when England came to bowl, leaving the national side's seam trio of Bresnan, Steven Finn and Graham Onions to be supported by the part-time spin of Joe Root and Kevin Pietersen as Essex closed 182 behind on 231-9.

The Nottinghamshire man appeared on the England balcony during the afternoon session with a bandage on the injured arm.

Swann, who made his Test debut in 2008, has taken 222 wickets in 53 matches, more than any other England off-spinner.

The former Northants man missed the Test series in New Zealand earlier this year after having elbow surgery.