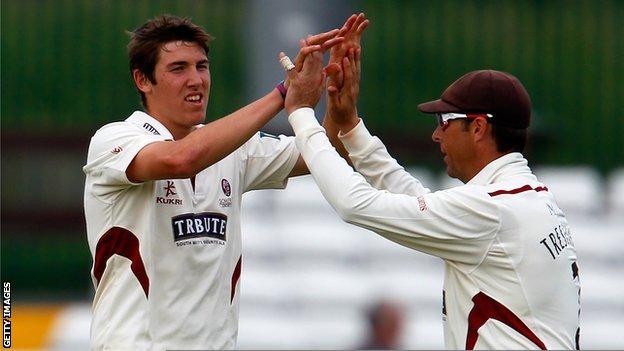 Overton, 19, took the wickets of Shane Watson and Brad Haddin during the county's four-day tour match against Australia at Taunton.

When asked if the teenager had the potential to play Test cricket, Somerset captain Trescothick said: "I have no doubt he will do.

"If you wanted to mould a fast bowler then he would be it."

He continued: "Whether it's within the next six months or the next two years, it's a matter of time before he pushes on.

"It would be really nice for higher people to look at him and try to work with him to hone his skills and keep improving his skills."

Overton finished with figures of 2-89 from 16 overs in Australia's first innings, but sat out the final day of the match, which the tourists won by six wickets, because of a knee injury.

Despite that, Trescothick said: "It was interesting to see how he bowled against some of the best players in the world - and I think he bowled some deliveries that were really promising.

"I know they commented on him and said what a prospect he was, so that's really encouraging."

Overton, a regular for England's Under-19s, made his first-class debut against Surrey in May 2012, a month after twin brother Craig broke in to the Somerset team.

And in 12 first-class games, Jamie has so far taken 32 wickets, with career-best figures of 6-95 coming against Middlesex in May this year.

"He works at his strength and training brilliantly and also has that something inside of him, that bit of animal. It's what a fast bowler needs. It's only a matter of time before he pushes on."