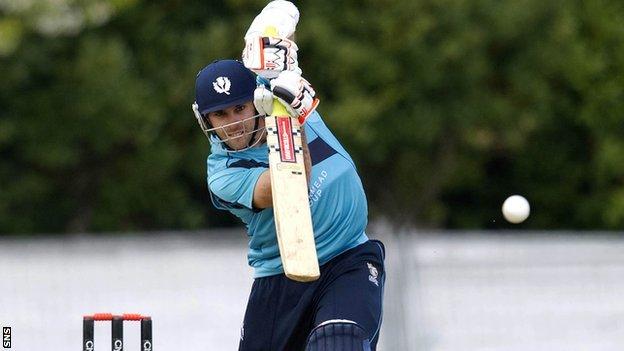 After Kenya won the toss, Scotland were put into bat and Matthew Machan's 114 runs off 111 balls helped the hosts to a total of 242-4.

But the tourists fell short of their target, ending 230 all out.

Machan followed up his century by taking 3-35, while Iain Wardlaw was Scotland's most successful bowler with 4-54.

Kenya lost opening batsman Alex Obanda for a second-ball duck as Wardlaw made an early breakthrough, but Irfan Karim (30) and Ouma rebuilt the innings before Mishra and Patel set up an exciting finish.

Wardlaw claimed the wickets of Nelson and Nehemiah Odhiambo and Hiren Varaiya before Neil Carter removed last man Mishra in the final over as the visitors were dismissed 13 runs short.

The two sides return to Mannofield in Aberdeen for the second one day match on Tuesday.