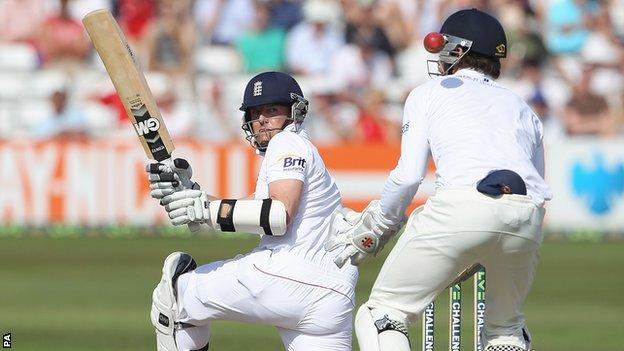 An eighth-wicket stand of 116 between Tim Bresnan and Graeme Swann took England to respectability after a careless top-order display on the first day of their four-day Ashes warm-up game against Essex.

Earlier, Joe Root, opening for England for the first time, made 41 and Kevin Pietersen a sparkling 49 until his dismissal began a slump of four wickets for 49 runs.

Virtually all of England's top seven played a part in their own downfalls before Bresnan and Swann took advantage of a tiring attack on a flat wicket.

Their partnership leaves England well placed, but the manner in which all of the front-line batsmen failed to capitalise on good starts will be a concern with the first Test against Australia at Trent Bridge beginning on 10 July.

A heavy schedule of limited-overs cricket and, in Pietersen's case, injury, have denied England's top six the opportunity to play much first-class cricket since the completion of the Test series against New Zealand on 28 May.

And that lack of time in the middle in this form of the game showed as a series of injudicious strokes wasted the opportunity for valuable pre-Ashes practice.

Pietersen, who arrived at Chelmsford on the back of his unbeaten 177 for Surrey against Yorkshire, looked set to take full advantage of Essex captain Ravi Bopara's sporting, or perhaps pre-arranged, decision to bowl first in perfect batting conditions.

Indeed, such was the imperious manner of Pietersen's 58-ball stay, it seemed only a mistake from the right-hander would bring about his downfall and so it proved.

An over after being put down from by the flying Tom Craddock off the leg-spinner's own bowling, Pietersen presented another, more straightforward chance which Craddock accepted.

That was the first of three strikes for the impressive Craddock, who had not taken a wicket in his two previous first-class appearances this season.

He produced a ripping leg break to account for Matt Prior, perhaps the only England batsman who was blameless for his dismissal, after Ian Bell was brilliantly caught on the sweep by the anticipation of Jaik Mickleburgh at short leg.

Another Essex bowler to catch the eye was Tymal Mills, the left-armer that regularly clocked speeds around and over 90mph.

He had Alastair Cook, playing on his home ground, caught behind from a flashing cut shot at the end of an opening half-hour when the England skipper looked much more assured than new opening partner Root.

Edgy at first, Root then warmed to his task, scoring mainly off the back foot but also coming forward to drive the often wayward Saj Mahmood.

However, after Root needed treatment for a blow to the left leg off Mills, he aimed a flat-footed poke at Mahmood and was held at second slip.

Jonathan Trott too looked in good order, driving on both sides of the wicket, but his airy waft at Mills was the first of four wickets to fall in the afternoon session.

And when Jonny Bairstow - seemingly set to line up at in the first Test at Trent Bridge following Root's promotion at the expense of Nick Compton - shouldered arms to a Mahmood delivery that took the top of off stump, England were in danger of being embarrassed.

They were rescued by Bresnan and Swann, with Swann in particular keen to counter-attack.

He twice lifted down the ground for boundaries in the same Craddock over, as he moved to a half century faster than the more cautious Bresnan.

The threat of the second new ball was also negated as numbers eight and nine gave England's top order a lesson in application.