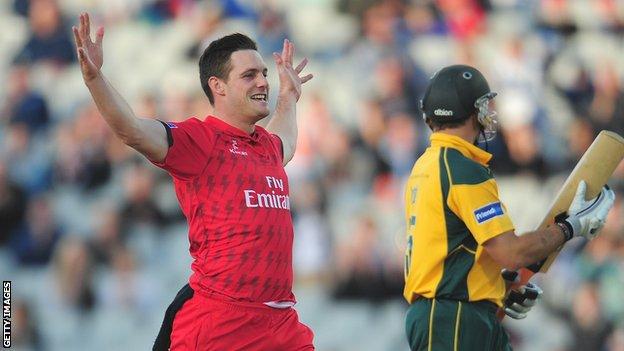 Nottinghamshire eased to a four-wicket victory against Lancashire in the FL t20, despite a five-wicket haul from seamer Mitchell McClenaghan.

Lancashire's innings began in comical fashion as Moore was run out in the first over following a mix-up with Prince, who soon succumbed to a miscued pull off the bowling of former Red Rose paceman Ajmal Shahzad.

They regrouped through Croft and Katich, while a late cameo from wicketkeeper Gareth Cross, who hit 10 from three balls, pushed the total past 150.

Although it was not enough for victory, Mitchell McClenaghan became the first Lancashire bowler to take five wickets for the county in a T20 match

New Zealand left-armer McClenaghan, who was making his home debut for Lancashire, had the dangerous Michael Lumb caught at first slip with his first ball and later removed Riki Wessels.

But England's Hales and Australia's Hussey, mixing brute force and clever placement, laid the platform for victory with a fourth-wicket stand of 78, Hussey reaching his half-century from just 25 balls.

He perished to the returning McClenaghan, as did Hales one short of his 50, but Samit Patel and Steven Mullaney saw Notts through to a second win in two games, while condemning Lancashire to a first FL t20 defeat in the process.