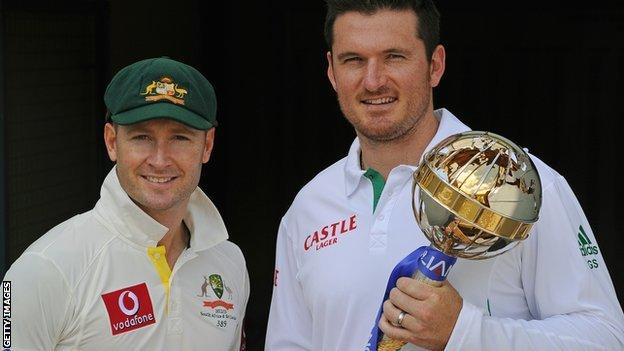 The International Cricket Council has confirmed England will host the inaugural World Test Championship as well as the 2017 Women's World Cup.

The World Test Championship will replace the 50-over Champions Trophy in the international calendar.

Although the ICC annual conference acknowledged the success of the recent Champions Trophy in England and Wales, it will be the last of its kind.

All events are subject to ICC finalising agreements with member countries

Several events were announced, with India hosting the tournament in 2021.

It will also host the World Cup two years later, with New Zealand awarded the Women's World Cup in 2021.

The men's and women's World Twenty20 events will continue to be played in parallel every four years, with Australia hosting in 2020, while the women's event will remain biennial - with West Indies and South Africa staging stand-alone Women's World Twenty20s in 2018 and 2022.

In 2015, Ireland and Scotland will co-host the qualifying event for the 2016 World Twenty20 in India.

ICC chief executive David Richardson said: "We are delighted to confirm the exciting schedule of events through to 2023.

"The Champions Trophy in England and Wales was highly acclaimed and appreciated by all. However, the principle of one pinnacle global event for each of the three formats over a four-year cycle is a good one and, as such, the board has agreed to replace the Champions Trophy with the World Test Championship.

"Now that the World Test Championship has been confirmed, we'll work on the playing conditions and qualification criteria, and will submit these to the ICC board for approval in due course."

The ICC had hoped to introduce a Test Championship, involving the top four teams in its Test rankings, in 2013 - but the event was postponed until 2017 because of a lack of "support and consent" from the ICC's commercial broadcast partner, and a final edition of the Champions Trophy staged instead.

The world governing body has expressed concern over the progress of stadium construction and improvements at two venues in Bangladesh, which is to host the men's and women's World Twenty20 in 2014.

There have been reports that South Africa and Sri Lanka have been lined up as possible alternative hosts, but the ICC board will make a final decision on venues after a further inspection and report in August.

In addition, the women's event in 2014 is to be expanded from eight to 10 teams, offering teams such as Ireland a greater chance of qualification when they take part in next month's qualifying event in Dublin.

Also of interest to Ireland fans is a change to the eligibility criteria for anyone who has played for a full (Test-playing) member country, but wishes to return to his original associate member country.

Ed Joyce had to spend four years "requalifying" for Ireland, returning to play for his native country in 2011 - four years after he last appeared for England, but that period will now be reduced to two years.

There will also be several changes in ICC playing conditions for international matches taking effect from 1 October.

Where an umpire believes the condition of the ball has been changed but there is no eyewitness to identify the culpable player, a two-step process will be introduced.

The umpire will first replace the ball while giving the fielding captain a first and final warning - and can then subsequently award the batting side a five-run penalty, replace the ball (with one of the batsman's choice) and report the captain under the ICC code of conduct.

Also from October, at the fall of a wicket the TV umpire can review a potential no-ball for a full toss above waist height or a bouncer above shoulder height, while wickets with flashing LEDs (light emitting diodes) in the bails and stumps - as used in Australia's Big Bash League Twenty20 competition - have been approved for use in limited-overs internationals, subject to an independent assessment of the technology.

Meanwhile, Afghanistan - whose remarkable progress over the last decade saw them qualify for the World Twenty20 in 2010 and 2012 - are promoted from affiliate to associate member status, earning them an improved level of ICC funding, while Romania have been accepted as an affiliate member.