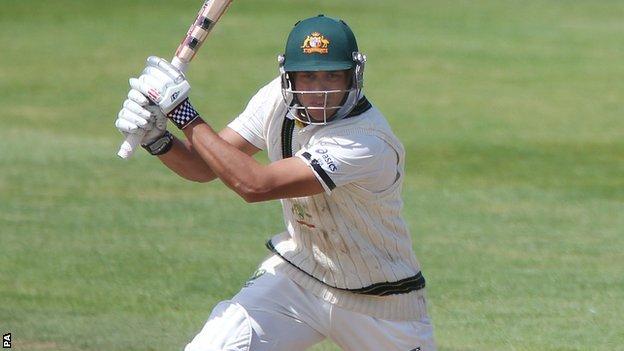 Australia completed a routine victory over Somerset by mid-afternoon on the final day of their game at Taunton.

Chasing 260 to win, the tourists began day four on 36-0 against a weakened attack as tendonitis prevented paceman Jamie Overton from taking the field.

Spinner George Dockrell (3-78) delayed the victory charge but Brad Haddin (52 not out) won the match with a six.

Vice-captain Haddin raced to his half century from only 40 balls, hitting three fours from a Gemal Hussain over before hoisting Dockrell over the ropes for the second time to reach his fifty and secure his side's victory.

Shane Watson, who had made 90 in the first innings, was not required to bat as the other batsmen - notably top scorer Khawaja - pressed their Ashes claims while Somerset toiled.

Hussain removed Cowan when he induced an edge to keeper Alex Barrow, but left-handers Khawaja and Hughes made their way to 153-1 by lunch before Dockrell began to profit from bowling into the rough outside off stump.

The Ireland left-arm spinner had Hughes dropped at short leg on 38 before Khawaja edged to captain Marcus Trescothick at slip.

As the Aussies pressed ahead, Dockrell bowled Hughes and Aussie skipper Michael Clarke (26) in successive overs as they tried to take him on, but Haddin saw the tourists home without further hindrance.

The Aussies now head to Worcester for their final warm-up before the Ashes - a four-day match beginning on Tuesday, where the hosts' batting line-up will be boosted by England opener Nick Compton.

Before then, England - without Compton, and with Joe Root opening in his place alongside captain Alastair Cook - take on Essex in a four-day game at Chelmsford, starting on Sunday.