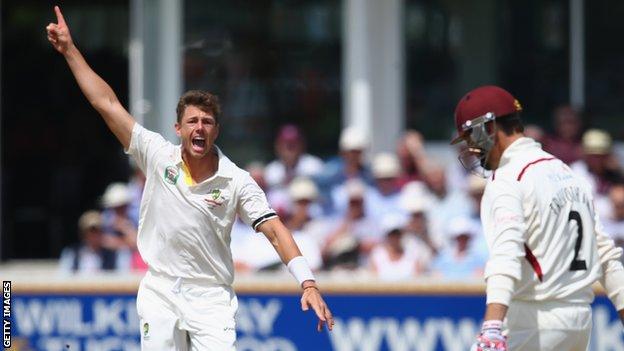 Australia's bowlers enjoyed a strong final session to leave them in sight of victory against Somerset on the third day of their first Ashes warm-up match.

Helped by an unbeaten 76 from Philip Hughes, the tourists declared on 321-5 - one run ahead - before lunch.

The tourists made the worst possible start as vice-captain Brad Haddin was trapped lbw for 38 to the first ball of the day at Taunton.

With no sign of the rain that blighted the match on Thursday, Hughes kept his composure, continuing to patiently pick off runs prior to captain Michael Clarke calling his players in in mid-morning.

Marcus Trescothick first edged behind, with Chris Jones pinned lbw by a yorker and a clean-bowled Craig Kieswetter soon following.

In between, the most controversial decision of the day saw England hopeful Nick Compton questionably given out lbw for 34 off the bowling of Nathan Lyon.

In one of his final acts as Australia coach, Mickey Arthur had said his side have the "best bowling attack in the world".

And they showed their prowess - under new boss new man Darren Lehmann - after tea.

Mitchell Starc began the collapse as he bowled Alex Barrow for eight as the 21-year-old failed to work one on the leg side, leaving the hosts on 180-5.

A stunning catch from Hughes ended Hildreth's anchoring knock, with Craig Meschede following him into the pavilion as he played onto his own stumps to give Lyon his second wicket.

George Dockrell and Jamie Overton went cheaply, before Trego's dynamic knock - which included 10 boundaries - saw Somerset offer some resistance until he was caught by Usman Khawaja off James Faulkner.

With another clear day expected on Saturday, Khawaja and Ed Cowan's positive displays in the final eight overs gave Australia a strong platform to chase down their victory target.