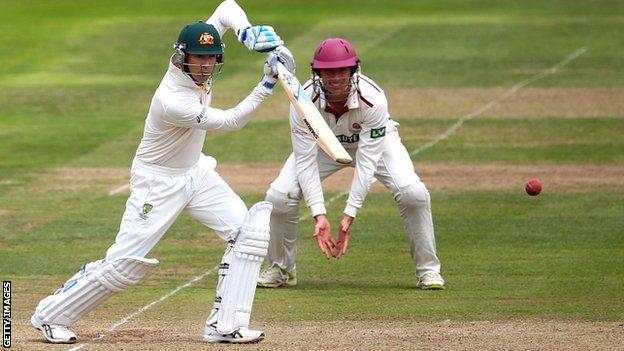 It has been the Australian cricketing equivalent of David Beckham's infamous metatarsal.

The will-he, won't-he worry over the state of captain Michael Clarke's back for the Ashes has preoccupied Australia fans ever since it ruled him out of the fourth Test against India in March.

After all, we are talking about a man who has scored more than 2,500 runs at an average of 66.9 since succeeding Ricky Ponting as captain in 2011, with one triple hundred and three doubles.

So influential has he been during a period of fluctuating fortunes for Australia that there is a joke doing the rounds claiming Clarke's chronic back condition has been caused by the weight of carrying his team on his shoulders.

Clarke flew over to England with Australia's Champions Trophy squad in May, only for his injury to flare up on the long-haul flight.

He was forced to miss the one-day tournament and has been receiving specialist treatment in London while his team have been staggering from one crisis to another.

And so it was in this context that Australia breathed a collective sigh of relief when their would-be saviour was passed fit to face Somerset in their opening warm-up match, and an even bigger one when he proceeded to bat as if he had never been away as Australia reached 266-4 in reply to the county side's 320 all out on the second day at Taunton.

Coming in at number four - one place higher than his usual position in Tests - he was as easy on the eye as ever at a ground which has long been famed for favouring bat over ball.

His footwork to spinner George Dockrell was particularly striking, its balletic grace contrasting with the jumpiness of Phillip Hughes at the other end.

There were lots of pushes and flicks into gaps for ones and twos as well as seven fours, each the product of immaculate timing and precise placement.

It therefore came as a surprise when he fell five short of a half-century, caught behind off a decent away-swinger from Craig Meschede - a seamer of no great pedigree who is nonetheless making a habit of collecting prize scalps, having removed Sachin Tendulkar for his maiden first-class wicket during India's 2011 tour and West Indies star Shivnarine Chanderpaul in a County Championship victory over Derbyshire on Monday.

Although Clarke's disappointment at missing out on a comeback half-century was palpable, he will have benefitted enormously from spending close to two hours in the middle.

Clarke's innings followed an equally encouraging 90 from Shane Watson in his first outing since new coach Darren Lehmann confirmed he would be opening the batting against England.

The muscular batsman, who relinquished the vice-captaincy after he was one of four players banned for a Test for not completing a homework assignment in India, took on the new ball from the start as he found the boundary 20 times via a mixture of cuts, pulls and meaty cover drives.

He had faced just 94 balls and looked on course to bring up three figures in a single session when he got a leading edge to cover 10 minutes before lunch.

Watson's struggle to convert fifties into hundreds - he has 19 half-centuries and two centuries in 75 Test innings - has been an uncomfortable theme his Test career, but he preferred to focus on the positives as he looked forward to the challenges that await in the Ashes.

"The English quicks are certainly as good as there are in the world at the moment and have been for the last few years," he said.

"It is the ultimate challenge to be able to take on the best bowlers with a brand new ball, sometimes with bowler-friendly conditions as well, so if I can't get up for that there's no point in playing."

Of the other Australia batsmen looking to impress their new coach on Thursday, opener Ed Cowan was caught behind off the sixth ball of the day before aiming a string of invective at the umpires and Usman Khawaja scored a frenetic 27 off 33 balls.

Hughes edged his first ball through the slips for four to set the tone for a scratchy unbeaten 44, featuring numerous mis-hits and swats at thin air.

The left-hander has not passed 50 in nine previous Ashes innings and may have to go on to post a big score on Friday if he is to be granted a chance to improve on that record.