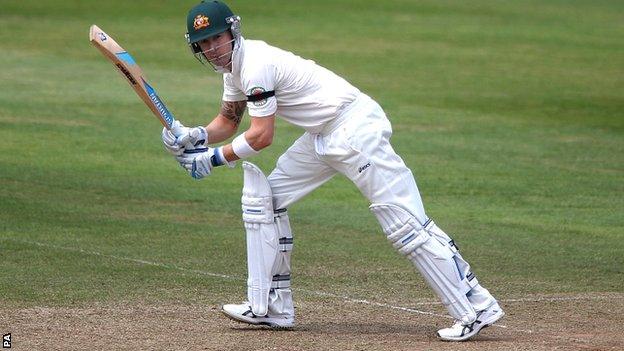 Shane Watson scored 90 and captain Michael Clarke hit 45 in his comeback innings as Australia reached 266-4 in reply to Somerset's 320 on a rain-hit second day of their Ashes warm-up match at Taunton.

The tourists lost opener Ed Cowan in the first over of the day but recovered through Watson's partnerships of 74 with Usman Khawaja and 69 with Clarke.

The captain, batting for the first time since March following a chronic back complaint, looked comfortable and fluent before he was caught behind off Craig Meschede.

Phil Hughes and Brad Haddin added 54 for the fifth wicket before rain ended play for the day on the stroke of tea.

It was a disappointing end to a day on which Australia's top order largely took advantage of a flat pitch and a fast outfield to play themselves into form for the Ashes, which start at Trent Bridge on 10 July.

The exception was Cowan, who got a faint nick on the last ball of Gemaal Hussain's first over and was caught behind.

The left-handed batsman looked unimpressed by the decision and made his feelings known to the umpires before trudging off.

Khawaja launched himself into every shot, striking six boundaries in his 34-ball 27, before edging a rising delivery from Meschede through to James Hildreth at second slip.

Watson cracked 20 boundaries in a muscular 94-ball innings and looked on course to bring up his hundred before lunch, only to get a leading edge to cover to give 19-year-old fast bowler Jamie Overton a deserved wicket.

Clarke, who has been receiving specialist treatment in London since arriving in England in May, got off the mark with a square cut off Peter Trego for the first of seven elegant boundaries.

It was a surprise when he fell five short of his fifty, albeit to a useful away-swinger from Meschede, which he edged through to the keeper.

Hughes, a left-hander whose Ashes spot is under scrutiny, looked fidgety at the crease, in contrast to Haddin, who launched spinner George Dockrell for two straight sixes in a fluent unbeaten 38.

By then, light rain had started to dampen the Taunton outfield and the umpires eventually took the players off five minutes before tea, with the tourists 54 runs short of Somerset's total.