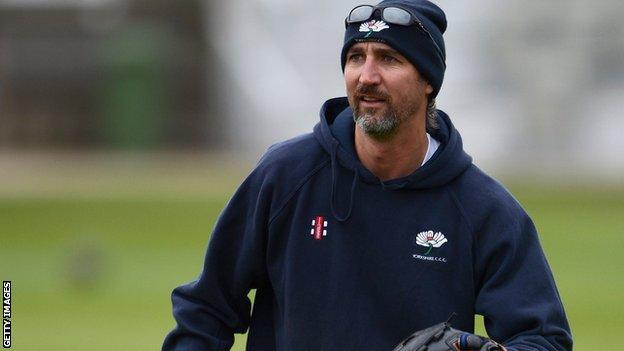 Miller was the competition's second-highest run-scorer last year while Starc was the leading wicket-taker.

Yorkshire reached the final, losing by 10 runs to Hampshire, and thereby qualified for the Champions League.

"It's going to be a challenge backing it up, no doubt, but we feel we have the personnel," said Gillespie.

"People talk about the overseas players, but the guys who've come in this season, Liam Plunkett, Jack Brooks and Andrew Hodd, they've shown they are fantastic cricketers who we feel can do a great job for us."

In the short term, the Vikings will be boosted by the presence of England star Jonny Bairstow, who will keep wicket in the opening match of the T20 campaign against Derbyshire on Friday.

Our philosophy is to look after our own skills and mindset. Our T20 game plan was pretty simple last year and it won't be that different.

England released Bairstow on a one-off basis ahead of their four day Ashes warm-up game at Essex, which starts on Sunday.

"We're in good form in the Championship, and though it's been a short preparation time, we had two T20 practice games with the squad at Headingley, and they went really well. Everyone looks in good touch and mentally in a pretty good place," said Gillespie.

"The YB40 performances haven't been so good, but when we realised we weren't going to progress to the final, we took opportunity to rotate the guys who bowl in the Championship.

"But T20 is by and large in a block, albeit with one Championship match in the middle, so we can concentrate on that.

"Our philosophy is to look after our own skills and mindset. Our game plan was pretty simple last year and it won't be that different.

Captain Andrew Gale also acknowledged that Miller and Starc would be missed.

"Getting to finals day last year was a real team effort, and, although we'll miss those overseas players, it gives the opportunity to other lads to step up to the plate.

"The way we're looking at it is that it's a trophy there to be won, and after getting to the final last year, we want to go and win it this time," said Gale, who is in outstanding form after scoring centuries in Yorkshire's last three Championship matches.

"You can't predict anything going into any competition, but we'll certainly be giving it our best shot and trying to go one better than we did last year."