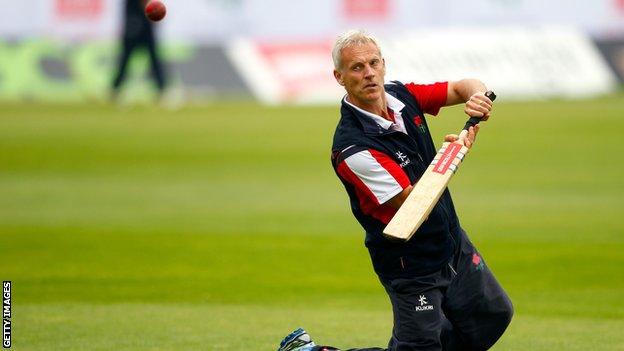 Peter Moores is looking to Lancashire's experienced players to make the difference in this year's FL t20.

The Red Rose, who last year, begin their campaign at Durham on Friday.

"Clear thought under pressure is the big thing. When things happen quickly, can you remain calm?

"We've got a lot of experience on the staff now. Hopefully that will stand us in good stead when things get tight," coach Moores told BBC Radio Lancashire.

"A calm head will normally win over anything else when it gets a bit tight, with bat or ball.

"With people like Glen Chapple, Simon Katich and Ashwell Prince, we've got a lot of experience out there, plus people like Steven Croft and Stephen Parry, who have played a lot of T20 cricket."

Lancashire came closest to lifting the trophy in 2005 when they were beaten in the final by Somerset.

A decade has passed since the domestic T20 competition was first staged and Moores, who coached Sussex in the maiden tournament back in 2003, believes teams and players are continuing to develop new ways of being successful in the game's shortest format.

"It is a proper game and a highly skilful game," he said. "The shorter you make it, it magnifies your mistakes more and you get put under pressure quicker.

"Batting and bowling knock each other on to develop the game. I don't know if it has changed massively - people have just got better at doing those skills."