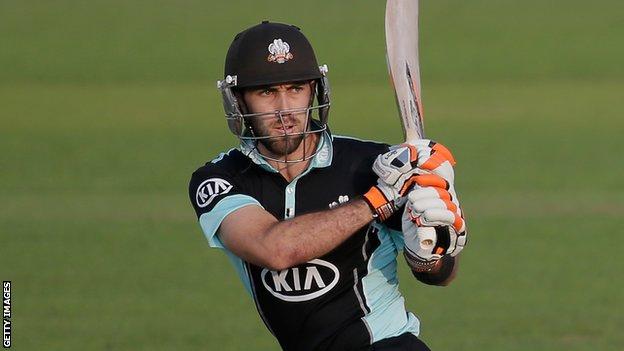 Surrey all-rounder Glenn Maxwell says the side can take the positives from their defeat by Hampshire in their opening FLt 20 match.

The Oval outfit were beaten by five wickets following a mid-innings batting collapse which left them defending 138.

The Australian told BBC London 94.9: "The guys showed a lot of heart to send it to the last over.

"We were probably about 20 runs short and deserved to be beaten in the 15th over with the way we batted."

He added: "We lost our way in the middle and gave up a good total to defend.

"To take it to the 20th over, anything could happen. Unfortunately they hit the winning runs and that was it."

The 24-year-old, who played for Hampshire in last year's competition, is available for Surrey's first seven matches before joining Australia A on their tour of South Africa and Zimbabwe.

"Life's a bit different in London from Southampton but I am loving my time at Surrey and it's been good fun so far," he said.

"There are a good bunch of lads and hopefully I will have some success with them."