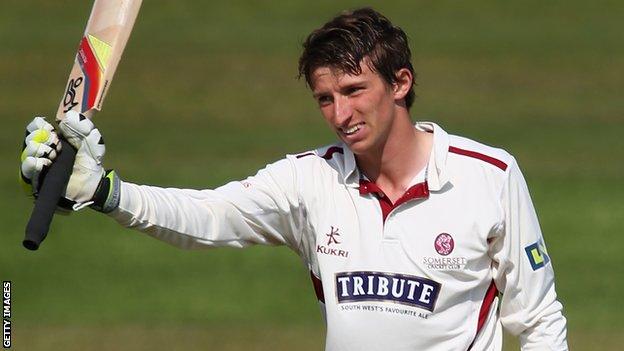 Somerset's Chris Jones says it was "surreal" to score his maiden first-class century against Australia in their four-day tour match at Taunton.

The 22-year-old was called up to replace injured Alviro Petersen and made 130 as his team totalled 320 on day one against the tourists.

"I had no real expectations of the day, I was just happy to be playing," Jones told BBC Somerset.

"It didn't sink in until I actually got to a hundred. It was surreal."

Jones has played 21 first-class matches previously, but had never scored more than 69.

His impressive performance for Somerset came four days after he hit 153 in a club game for Taunton Deane against Weston-super-Mare.

And it rounded off a successful week on all fronts for the Essex-born player, who also received a first-class honours degree in economics at Durham University.

"I'll remember this for a long time," he said.

Who is Chris Jones?

"Everything's gone to plan over the last seven days. Maybe next week won't be so good."

The right-hander was quick to praise the influence of team-mate Nick Compton, who was under scrutiny at the crease after being left out of England's pre-Ashes match with Essex.

On his 30th birthday, Compton scored 81 as the duo shared a partnership of 170 for the second wicket.

"I've played with Nick a bit in the past and he's a very calming influence," added Jones.

"He says the right things and managed to keep me on a level playing field.

"You can get a bit giddy, thinking you're better than you are, and you play a few more shots than you should do.

"But he's there to rein you back in and make sure you're doing what you're supposed to be doing."