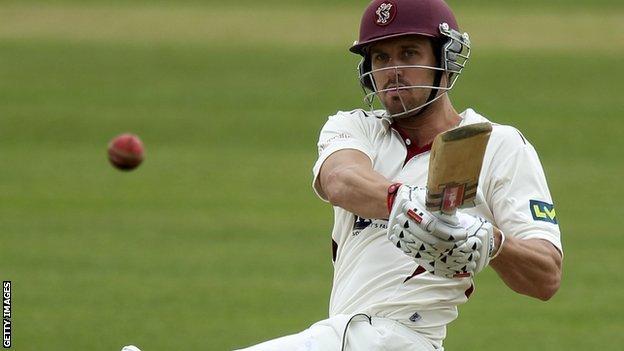 Nick Compton is set to play for Worcestershire against Australia next week as he continues to fight for his place in England's Ashes Test team.

The opener made 81 for Somerset against the tourists on the first day of a four-day match at Taunton on Wednesday.

Joe Root had overtaken Compton in the pecking order for the first Test, which starts at Trent Bridge on 10 July.

"Nick Compton's one-off appearance for Worcestershire will not alter England's plans to open with Joe Root for the first Ashes Test. But it does give Compton a chance to cement his position as the next cab off the rank should England suffer an injury to any of their batsmen. Compton's temporary move is no skin off Somerset's nose given that he was unlikely to feature in their Twenty20 plans, but it does give the batsman an opportunity to follow up his classy 81 for Somerset on Wednesday with another innings of substance against the touring Australians."

However, Compton's one-off county switch shows he still has a chance to regain his England Test place.

He hit back-to-back Test centuries for England in New Zealand in the winter, but scored just 39 runs in four innings in the two Tests against the Kiwis this summer.

As a result, Compton, 30, was left out of England's warm-up game against Essex this weekend.

There is a precedent for his one-off appearance for a different county. In 2011 an out-of-form Andrew Strauss played for Somerset against India tourists when his county Middlesex had no fixture.

The four-day match between Worcestershire and Australia begins on 2 July.

Compton has averaged 31.93 in his nine tests, hitting two centuries.