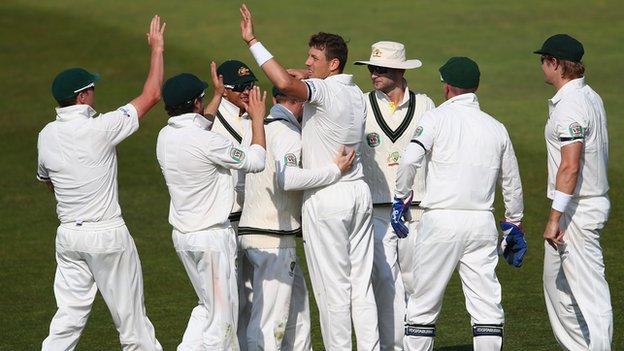 Australia began the first day of their Ashes tour with a pre-match huddle on the Taunton outfield that culminated in several of the players collapsing in belly laughs.

For the majority of the day's cricket that followed, however, the only laughter in evidence came from barely-believing Somerset fans.

Two weeks to the day before the first of five Ashes bashes begins at Trent Bridge, Australia's attack had looked toothless, as a team with just one win in nine County Championship matches this season piled on the runs to reach 304-2 after tea.

Nick Compton, deemed surplus to England's requirements on Monday, had made a classy 81, while Chris Jones - a makeshift number three who was playing against Weston-super-Mare in the West of England Premier League as recently as Saturday - had long passed his maiden first-class century and had just deposited Nathan Lyon and Peter Siddle into the stands.

But just when the scribes in the press box were starting to ink in a new low in Australia's Ashes preparations, the backlash arrived.

After Jones succumbed for 130 to a tired-looking slice to gully, Australia took the new ball at the first available opportunity and used it to devastating effect.

Belatedly finding their rhythm in the final half-hour of play, Mitchell Starc and James Pattinson took six wickets for no runs in six overs as the hosts slumped to 320 all out.

I wasn't really meant to be playing, but I managed to squeeze in to the team and enjoyed every minute

As comebacks go it was ruthless, and underlined the wicket-taking capabilities of a pair of young bowlers who look poised to share the new ball against England.

Seen in the context of the day, however, the late barrage from Starc and Pattinson - who found pace and swing with the new ball - only papered over the cracks in an otherwise unconvincing Australian bowling performance.

Consider the identity of their tormentor-in-chief.

Jones, 22, was only playing because of an injury to South African Alviro Petersen, and held a previous first-class batting average of 17.31 from 33 innings.

And yet here he was, fresh from gaining a first-class degree in economics from Durham University last Tuesday, flaying Australia to all parts of Taunton.

"It feels quite surreal," said Jones afterwards. "I wasn't really meant to be playing, but I managed to squeeze in to the team and enjoyed every minute.

"I didn't really think about it, and then suddenly I had 70 or 80 on a fast outfield. It's been quite a good week."

Jones was the beneficiary of some wayward bowling from James Faulkner, a 23-year-old all-rounder yet to make his Test debut, and Siddle - by far the most experienced bowler in Australia's Ashes party with 41 Test caps.

Both were guilty of bowling too short on a flat pitch offering them little assistance, allowing Jones, Compton and former England Lions captain James Hildreth - who struck a breezy 66 - to cut and pull with abandon.

Siddle failed to bowl a single maiden as he gave up 62 runs in 13 wicketless overs, while Faulkner was only marginally less expensive as he finished with 1-70 off 17.

In the spin department, Lyon plugged away gamely and removed Compton with a nicely-flighted delivery that caught the batsman on the back foot. But the fact that captain Michael Clarke was forced to turn to the occasional medium pace of Usman Khawaja during the afternoon session was a sign of how things were not going to plan.

That Faulkner returned to bowl a much more probing spell after tea hinted at his potential, but unless he can deliver something special with the bat it would be a surprise to see his name on Australia's team-sheet for Trent Bridge.

Reflecting on the day, Australia's new coach Darren Lehmann said Australia's bowling performance had been "inconsistent" and revealed that seamers Jackson Bird and Ryan Harris will be given their chance in the second warm-up game against Worcestershire next week before he decides on the final Ashes line-up.

"It is a pretty good wicket and a small ground with a fast outfield but I thought we bowled four or five balls out of six really well then let them off with a bad ball later in the over," he said.

"There were also a lot of boundaries which we need to work on coming up against quality sides. We bowled well in patches, we just need to be more consistent.

"We want blokes to perform and if you perform well you will get an opportunity in the first Test."

Lehmann's message will not have been lost on Australia's batsmen, who will begin their fight for Ashes places when play resumes on Thursday.