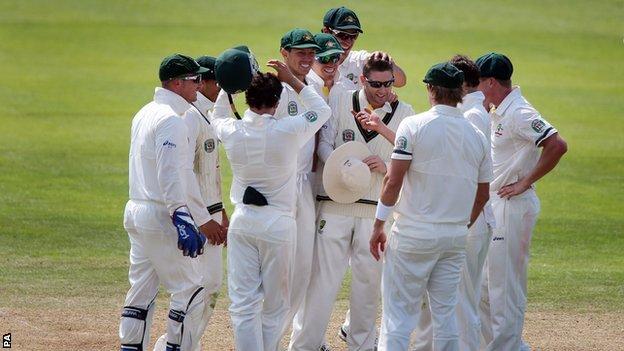 Australia took a flurry of late Somerset wickets to finish a difficult opening day of their Ashes tour on a note of triumph.

Chris Jones struck his maiden first-class hundred and Nick Compton responded to being dropped by England with a confident 81 as Somerset reached 304-2 after tea.

But a new-ball barrage from Mitchell Starc and James Pattinson, in which the hosts lost six wickets for no runs in six overs, saw them collapse to 320 all out.

Australia's openers then batted out one over to reach 2-0 at the close.

Starc finished with figures of 4-33 and Pattinson 4-56 to strengthen their claims to open the bowling in the Ashes, which start on 10 July at Trent Bridge.

But in truth, their late heroics only served to mask the failing of Australia's other bowlers, who rarely looked threatening and at times were treated with disdain by the unheralded Jones, who cracked 21 fours and two sixes.

Jones came into the match with a first-class average of 17 and was only playing because of an injury to regular number three Alviro Petersen, but by the time he had sliced James Faulkner to gully he had made 130, 61 more runs than his previous highest first-class score.

Taking his lead from the increasingly confident Compton, he helped steer Somerset to 97-1 at lunch after former England opener Marcus Trescothick had pulled Pattinson to Starc at fine leg in the fourth over of the day.

Compton, who was left out of the England squad for next week's Ashes warm-up match against Essex, brought up his fifty off 82 balls from the second delivery after lunch and cracked Peter Siddle for successive fours to close in on a century.

On 81, however, he pushed forward to the spin of Nathan Lyon and edged to slip, where Australia captain Michael Clarke took a one-handed catch at the third attempt.

Jones brought up his three figures with a punch through the off side off Faulkner for four and added a further 30 before he aimed a tired-looking drive at the same bowler and got a thick edge to Shane Watson.

As Jones left the field to handshakes from the Australian players, there was little indication of the fireworks that would follow with the new ball.

First, Starc bowled Craig Kieswetter with an inswinging yorker and then James Hildreth's breezy 66 came to an end when he was trapped lbw by Pattinson.

Somerset's next five batsmen failed to add a single run between them as Starc accounted for Alex Barrow, Craig Meschede and George Dockrell, while Pattinson got Jamie Overton and Peter Trego.

All five were either clean bowled or lbw, with only last man Gemaal Hussain surviving the onslaught to finish unbeaten on six.