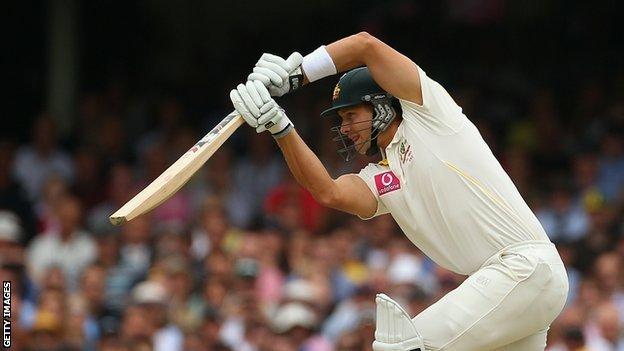 Shane Watson will open the batting for Australia in the Ashes, new coach Darren Lehmann has confirmed.

The 32-year-old all-rounder has not opened at Test level since the second Test against South Africa in Johannesburg in November 2011.

But he opened the batting in Australia's warm-up game against Somerset at Taunton on Wednesday.

"Watson will open in the Test series, there's no dramas for me at all," Lehmann told BBC Sport.

"He's been up and down the batting order, but his most success has been as an opener.

"We have had one locomotive come during the week, with the sacking of Mickey Arthur. To get this revelation, that's the big bit of news for the Australians - Watson, he's going to open! They've made that decision now. That is what Darren Lehmann thinks is best for Watson, to go in first. That's where he wants to bat and that is where I think he is at his best."

"We hope he gets a big score here for us tomorrow, and see how we go."

Watson enjoyed considerable success as an opener during Ricky Ponting's captaincy from 2009 to 2011, before suffering hamstring and calf injuries that kept him out of the side.

He was switched to number three in the batting order in the West Indies on his return and has moved up and down ever since.

Watson averages 43 in Test matches as an opener, compared to an overall career average of 35. His two Test centuries have come as an opening batsman.

Lehmann refused to speculate on who will open with Watson in the first Test at Trent Bridge, which starts on 10 July.

Ed Cowan and the suspended David Warner have been the preferred option recently, but both have struggled to score runs.

Left-hander Cowan is Watson's opening partner at Taunton, but recalled veteran Chris Rogers is also in the reckoning.

Mitchell Starc finished with figures of 4-33 and James Pattinson 4-56 as Australia's bowlers rallied to take six wickets for no runs in six overs, dismissing Somerset for 320 in their first innings.

The Aussie openers then batted out an over to reach 2-0 at the close.