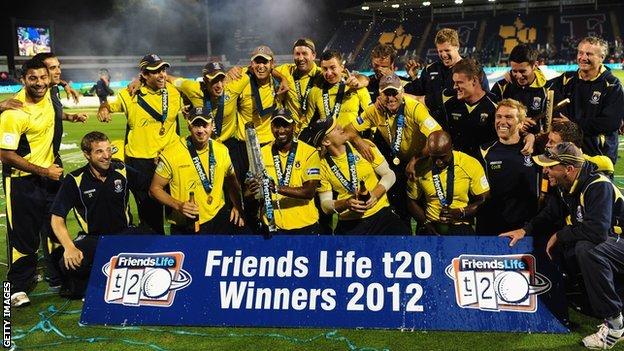 Hampshire begin the defence of their FL t20 title when they host Surrey on Wednesday (19:10 BST) in the opening game of this summer's competition.

The fixture at Southampton is the first of 97 that will be played over the next seven and a half weeks, culminating in finals day at Edgbaston on 17 August.

Live commentary of every game will be streamed on the BBC Sport website.

There will also be regularly updated scorecards and match reports of every game on the site.

The 18 first-class counties are split into three regional groups of six for the competition, covering the North, South and Midlands, Wales & West.

Every team in each group will play each other home and away, with the top two automatically qualifying for the quarter-finals, which will be played in the week commencing 5 August.

They will be joined in the last eight by the best two third-placed sides.

In last season's quarter-finals, former New Zealand all-rounder Scott Styris hit the then joint-third fastest century in Twenty20 history when he blasted 100 not out off 37 balls to help Sussex beat Gloucestershire to reach finals day.

His effort has since slipped to joint-fourth in the list after Chris Gayle reached three figures off only 30 balls, before going on to compile an unbeaten 175 off 66 deliveries, as Royal Challengers Bangalore thrashed Pune Warriors by 130 runs in the Indian Premier League in April.

Sussex went on to lose to Yorkshire in the semi-finals at finals day in Cardiff, while Hampshire beat Somerset in the last four before beating the Tykes by 10 runs in the final to win the title for the second time in three seasons.