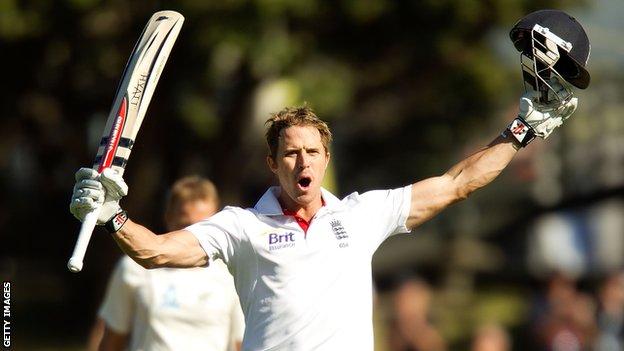 Joe Root has been picked to open in England's four-day game against Essex starting on Sunday, but Trescothick says his Somerset team-mate may still feature against Australia this summer.

"Only three Test matches ago he got back-to-back hundreds and I think it's quite harsh on him," said Trescothick.

"He will bounce back and may get an opportunity yet."

Compton made a case for a return to the Test side by making 81 in his county's game against Australia at Taunton on Wednesday.

"I still think there's a massive opportunity. You don't know about injuries and that sort of thing," said Trescothick.

"When he gets into a bit of a rhythm and starts getting runs he'll get a boat load."

Compton, 30, seemed to cement his Ashes spot when scoring successive centuries against New Zealand in the winter.

But his form tailed off in the home series against the Kiwis, as he scored 39 runs in four innings at an average of 9.75.

Compton lines up for Somerset against an Australian side playing under new coach Darren Lehmann for the first time.

Trescothick, who won 76 caps for England, says he is intrigued to see how Australia perform at the County Ground and was surprised by the sacking of previous coach Mickey Arthur.

He added: "It's going to go one of two ways. Either they'll really rally around Darren Lehmann - he's a good guy, very well liked in the Australia set-up and a good coach.

"Or, if England can get on top and put them under pressure in the first game, or first couple of games, you might see a few cracks exposed."