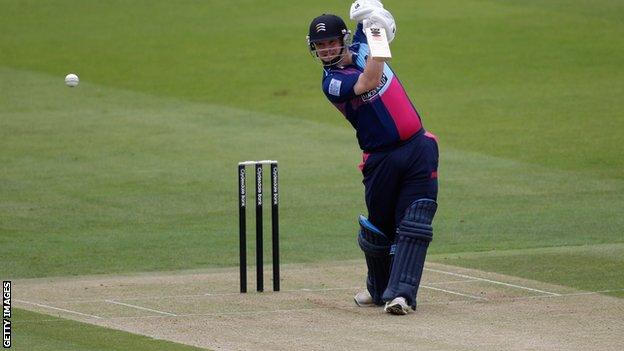 Paul Stirling's century led Middlesex to a 116-run win over Jersey in a Twenty20 game at Grainville.

In reply, the islanders were restricted to 119-7, with Dean Morrison top-scoring with 45 before falling lbw to Australian Adam Voges.

"We know we can do better, it's been a good exercise for us," Jersey coach Craig Hogan told BBC Radio Jersey.

Jersey's bowlers stuck with it and the fielding was good too.

Dean Morrison showed his class with the bat, hitting Jersey's only six.

In the end though professional cricket triumphed as Jersey struggled to keep up with the run rate.

"They're a quality side. That's the sort of cricket we need to get ourselves better,"

Jersey used the match as part of their build-up to next month's in Sussex, while Middlesex are preparing for the FL t20 competition, which they start on Friday against Kent.

"It was a very satisfactory evening for us," said the county's director of cricket, Angus Fraser.

"Paul Stirling is as good a striker of the ball as there is in the world, that's how cleanly he hits the ball.

"It's about doing the right things and that's what sport at the top level is about."

Middlesex continue their mini tour of the island on Wednesday when they face a "select team" made up of a mixture of Jersey and their own players.