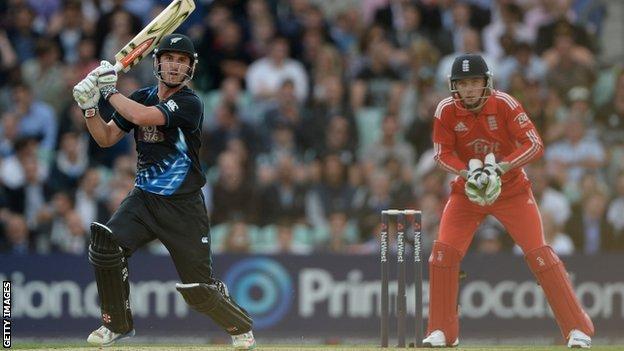 England fell six runs short of a remarkable win as New Zealand took the lead in the two-match Twenty20 series.

New Zealand were sent on their way to a record T20 score over their opponents by duo Hamish Rutherford (62) and captain Brendon McCullum (68).

The pair put on 114 from 67 balls for the second wicket, while Ross Taylor caused more damage with a swift unbeaten 32 as New Zealand made 201-4.

Despite great batting from Luke Wright (52) the chase proved too great.

The Sussex man, who was also by far the best England bowler, made what seemed at first insurmountable into very probable as both he and Nottinghamshire youngster Alex Hales took England's score from 50-1 to 105 after just 10 overs.

Despite losing the wicket of Hales, England still had clubbers Eoin Morgan, Ravi Bopara and Jos Buttler to come, and had also been matching New Zealand's run rate.

Winning when needing to score more than 200 had only been managed three times in this format of the game and never in England, but the home support were hopeful of seeing one of the great innings.

However, as the finishing line came into view England suffered two big setbacks courtesy of brilliant pieces of fielding.

The first was an excellent high one-handed catch by Taylor at slip to dismiss captain Morgan (seven) and the second was a run out from the gloved-hand of keeper Tom Latham.

The 21-year-old kept his composure to strike the wicket at the bowler's end and send Buttler back to the pavilion with eight balls remaining.

Corey Anderson had the unenviable task of bowling the final over, but despite being slogged for six by Ben Stokes first ball, he steadied himself to restrict the Durham player and Bopara to just four more runs as New Zealand clinched a worthy win.

Earlier, England won the toss and elected to field. They got off to the perfect start when 6ft 7in debutant Rankin, who had previously played for Ireland, had opener James Franklin caught behind in the first over with just one run on the board.

However, the good vibes lasted just a few minutes as Warwickshire's Chris Woakes went for 19 runs in the following over - he did not return to the attack.

The next 18 overs of bowling were tainted by wides, poorly-pitched deliveries and wayward spin, with New Zealand's batsmen, in particular, Rutherford and McCullum, taking advantage of the weak attack.

That pair put on a hugely entertaining 114 for the second wicket. Left-hander Rutherford's 62 came off 35 balls, decorated by six fours and four sixes.

Both Rutherford and McCullum fell to Wright (2-31 off four overs). The medium-pacer's delivery to dismiss McCullum was arguably the ball of the match - a slower-ball yorker which turned into a daisy-cutter en route to the stumps.

Taylor came in and produced another useful cameo knock from 19 deliveries and was well supported by Latham who was caught, penultimate ball, by Bopara off the bowling of Jade Dernbach.

New Zealand's final total of 201 is the highest ever in T20 cricket against their opponents. Their previous best was 192-6 set in Hamilton this year.