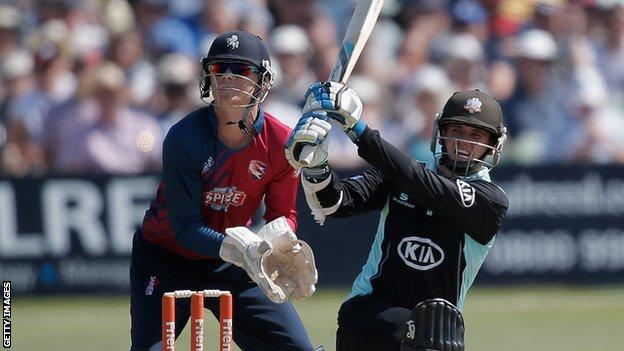 Opener Steven Davies made a superb unbeaten 95 as Surrey beat Kent by 31 runs at Canterbury to move to the top of the FL t20 South Group.

Davies missed out on a century as he was denied the strike in the 20th over.

Sam Northeast made 61, but Kent's challenge faded as they lost seven wickets for 46 runs and Jade Dernbach took 3-22 as ended on 145-9.

Surrey included former Australia skipper Ricky Ponting in their side, but he only managed 19 before miscuing an attempted big hit, allowing bowler Matt Coles (2-20) to run back and take an excellent diving catch.

However, Davies' innings ensured a tough run-chase for Kent and although Northeast set the right tempo and Darren Stevens made 30 off 17 balls, they fell away disappointingly for their second successive defeat in this year's competition.