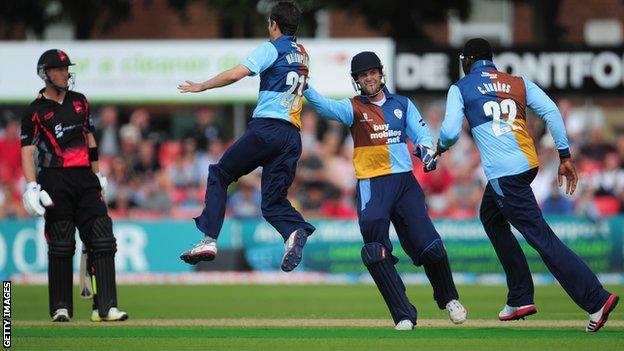 David Wainwright took three wickets in six balls and a stunning catch as Derbyshire beat Leicestershire by 24 runs in the FL t20.

The visitors made a challenging 173-3 with Wes Durston smashing three sixes in his 83 from 62 balls.

The Foxes, who were beaten by Notts Outlaws on Friday night, were well set when Cobb and Niall O'Brien put on 54 in 32 balls for the first wicket.

But their challenge slipped away when Wainwright spectacularly got rid of Al Hasan for four with a catch in the deep.

Earlier, Shiv Chanderpaul (38) and Chesney Hughes (34) provided good support to Durston, who was out to the penultimate ball of Derbyshire's innings.

The visitors have now won two out of two following Friday's dramatic victory at Yorkshire.