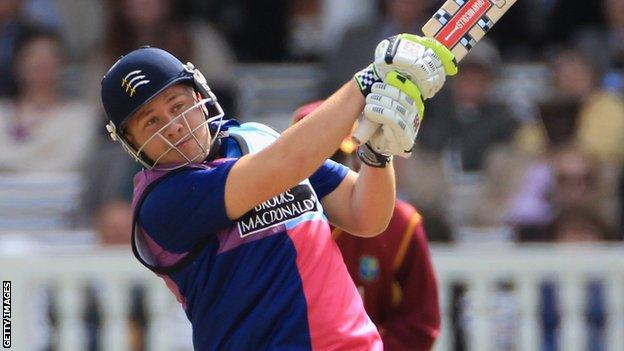 Adam Rossington blasted 41 off 20 balls for Middlesex as he led his side to a thrilling four-wicket win over Kent.

Needing 11 off the last over, the 20-year-old wicket-keeper hit a four and a six as the Panthers crossed the winning line with two balls to spare on 111-6.

Kent mustered 129-5 as rain limited their innings to 15 overs, before Vernon Philander took 4-8 on his debut to reduce Middlesex to 27-4.

But the South African's efforts were in vain as Rossington had the final say.

Despite the rain clouds lurking play got underway at the scheduled 19:00 BST start time but, shortly after Rob Key fell for 13, the showers moved in and the players left the field for more than an hour.

When the game resumed at 20:40 BST, Darren Stevens hit 26 off just 10 balls and Philander struck 13 from seven as Kent posted a competitive total in friendly, overhead conditions for the bowlers.

As Middlesex chased a revised 111 in 12 overs, Philander utilised the muggy evening as he bowled Paul Stirling for nought and picked up the wickets of Dawid Malan (18), Joe Denly and the dangerous Adam Voges.

When Gareth Berg fell to James Tredwell for two to leave Middlesex 74-6 the game looked over, but Rossington put on 37 with Josh Davey (13 not out) in just 17 balls to secure the victory.