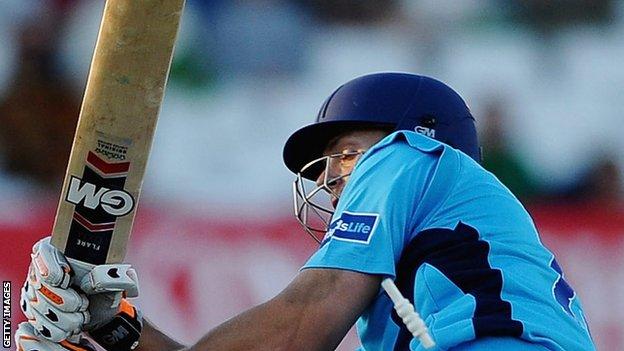 Derbyshire secured a dramatic last-over win as they beat Yorkshire by two wickets in their opening FL t20 game.

The Falcons looked to be heading towards defeat as they collapsed from 56-1 to 70-7 as Jack Brooks tore through the batting line-up with 4-21.

But Jonathan Clare hit a composed 35 not out to see the visitors home with three balls to spare on 120-8.

Earlier, Yorkshire posted 119-8 as only Gary Ballance (44) contributed with the bat and Mark Footitt took 3-22.

As Derbyshire moved along without trouble to 40 without loss, there was little sign of the twists and turns to come in the next hour.

But, after Wes Durston (14) and Shivnarine Chanderpaul fell in quick succession, it sparked a crazy 20-minute spell in which six wickets fell for just 14 runs.

Chesney Hughes, who had blasted his way to 36, was bowled by Brooks, before the ex-Northamptonshire seamer claimed the scalps of captain Wayne Madsen, Dan Redfern and Tom Poynton.

Albie Morkel, making his Derbyshire debut, had earlier taken two wickets, but could only muster a single with the bat as he was caught on the boundary off the bowling of Azeem Rafiq and David Wainwright was trapped in front by the same bowler as they were reduced to 92-8.

The composed Clare, however, struck three boundaries and a six in his innings to help Derbyshire past the winning line.